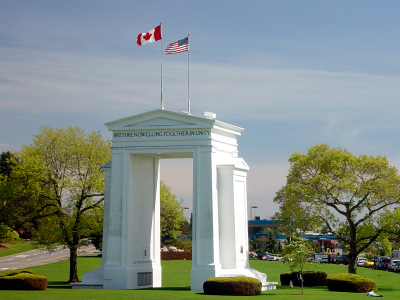 The Peace Arch is on the Canada–United States border between the Blaine, Washington and Surrey, British Columbia. It is 67 feet tall and dedicated in September 1921, commemorates the signing of the Treaty of Ghent in 1814. The monument is built on the exact United States–Canada boundary, between Interstate 5 and Highway 99, in the grass median between the northbound and southbound lanes. The Peace Arch has the flags of the U.S. and Canada mounted on its crown, and two inscriptions on both sides of its frieze. The inscription on the U.S. side of the Peace Arch reads “Children of a common mother,” and the words on the Canadian side read “Brethren dwelling together in unity”. Within the arch, each side has an iron gate mounted on either side of the border with an inscription above reading “May these gates never be closed.”

At the Un-National Monument along the Canadian Border
by William E. Stafford

Birds fly here without any sound,
unfolding their wings across the open.
No people killed—or were killed—on this ground
hallowed by neglect and an air so tame
that people celebrate it by forgetting its name.

On May 18, 1952, American singer and actor Paul Robeson performed on this spot. He had been invited to Canada to take part in labor rally in Vancouver but officials refused to let Robeson cross the border. Branded a left-wing radical for his strong views about equality, the U.S. government had banned him from performing and revoked his passport. Refusing to be silenced, Robeson rolled up on a flat-bed truck and started singing about civil rights, freedom and social justice to 40,00 people. He introduced his first song stating “I stand here today under great stress because I dare, as do you — all of you, to fight for peace and for a decent life for all men, women and children.”

Paul Robeson stood
on the northern border of the USA
and sang into Canada
where a vast audience
sat on folding chairs
waiting to hear him.

He sang into Canada.
His voice left the USA
when his body was not allowed
to cross that line.

Remind us again, brave friend!
What countries may we sing into?
What lines should we all be crossing?
What songs travel toward us
from far away
to deepen our days?