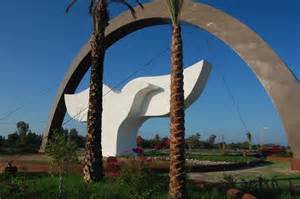 Palomas de la Paz is known by the locals as “La Cola de la Ballena,” because, although it represents two dove in profile, also bears the shape of a whale’s tale, in honor of the many species of whale that populate the Sea of Cortez, as well as the California Gray Whales which annually migrate, breed and give birth in the lagoons of Baja California Sur’s Pacific Coast. It is along the road between the airport and the city. Locals also sometimes call it “The farting whale,” because of its location near the stink of a sewerage plant.