Founded in 1993, the Peace Garden, situated along the Susquehanna River in the two blocks just north of the Pennsylvania Governor’s Residence, is a collaboration between the city of Harrisburg and the Harrisburg-Hershey chapter of Physicians for Social Responsibility. Along its paths are bronze plaques bearing words of wisdom from some of the world’s most highly esteemed statesmen, religious figures and ordinary citizens. The stunning sculptures are by Dr. Frederick Franck, an oral surgeon who worked with Albert Schweitzer in Africa. Depicted above is “Seven Generation,” based on Iroquois wisdom. Also installed are “Hiroshima: the Unkillable Human” (below) and “Death and Resurrection of the Heart.”

The oasis of flowers, trees and ideas was inspired by a speech given in Hiroshima by Dr. Bernard Lown, founder of Physicians for the Prevention of Nuclear War (which was awarded the Nobel Peace Prize in 1985), and embodies the central message of Physicians for Social Responsibility, that the natural world, nations, and the welfare of individuals are inextricably linked. The doctors maintain the park, including planting 1,200 annuals each year.  Wouldn’t it be wonderful to have something like this along the Mission Reach? 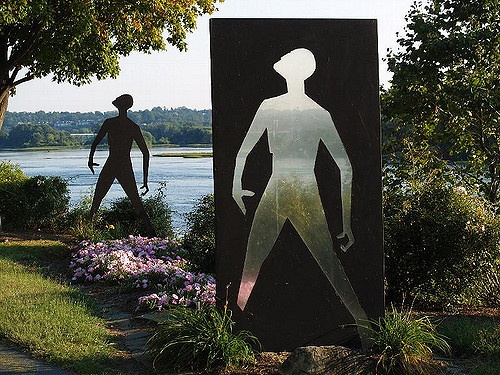