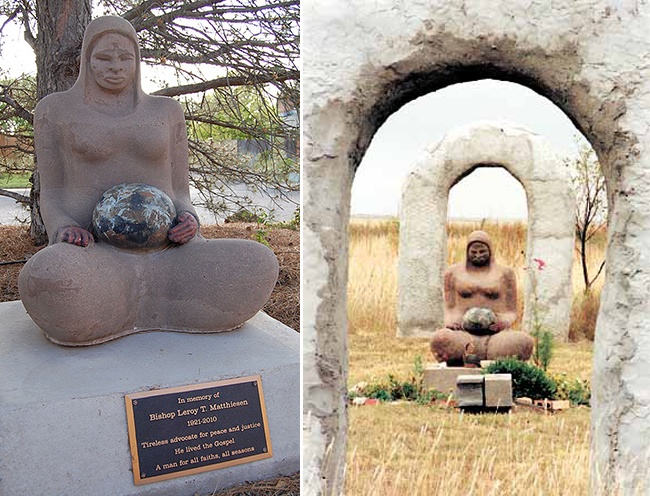 The Madre del Mundo Statue was created by artist/potter/sculptor Marsha Gomez; she designed the Madre to be inclusive of all women, so each could see herself in the image, whether African-American, Asian, American Indian, Hispanic or white. Many see the image as Mary; others see her as the divine feminine in their own tradition. The first Madre, a cast mold of fiberglass, was installed near the Nevada Test Site, the primary testing location of American nuclear devices from 1951 to 1992. That Madre was seized by authorities at one point, but later returned, and is currently in a shrine near Cactus Springs, NV. Another is located at a refugee center near El Paso that serves as a reception center for Central American and other refugees; a third Madre is located at Laguna Gloria on Lake Austin. The concrete mold, with Styrofoam inside, was brought to the Peace Farm across the road from the Pantex nuclear weapons plant near Amarillo, TX in 1989, and installed as a symbol of resistance to nuclear weapons. In the years the Madre remained at the Peace Farm she drew regular visitors for meditation and passers-by from the highway. Many left small offerings, from rocks to coins to notes and various mementos. The Peace Farm donated the Madre to the Amarillo Unitarian Universalist Fellowship in 2011 in the memory of [Catholic] Bishop Leroy Mattieson. The photo on the right is the original location at the Peace Farm; on the left, at the UU Church.