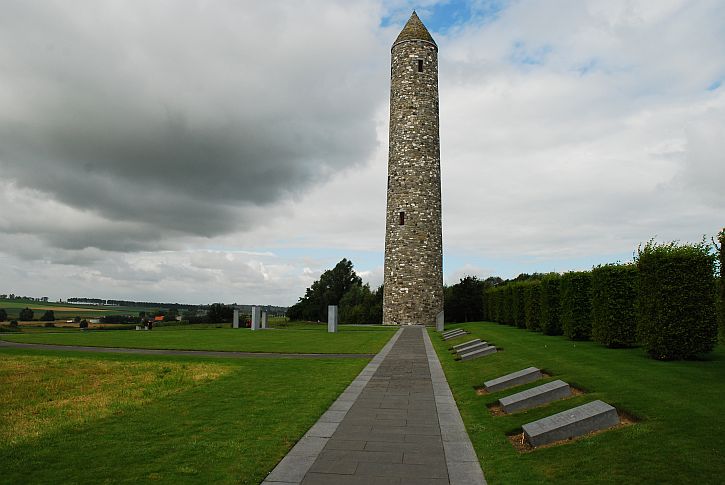 During World War I, the Irish — unionists and nationalists, Protestants and Catholics — fought side-by-side in the trenches as part of the British forces  Here in Messines, site of a 1917 battle, the Irish not only look back to memorialize those who died in that war, but also to look forward to a day when they themselves can live together in peace. The tower design is that of a traditional Irish round tower dating back to the 8th century. As part of the design the inside of the tower is lit up by the sun only on the 11th hour of the 11th day of the 11th month,  the time at which the Armistice was declared and the guns fell silent on the Western Front after four years of fighting. The park was dedicated in 1998 by Irish President Mary McAleese. At the entrance to the park is a brass plaque with this statement, labeled the Peace Pledge:

“From the crest of this ridge, which was the scene of terrific carnage in the First World War on which we have built a peace park and Round Tower to commemorate the thousands of young men from all parts of Ireland who fought a common enemy, defended democracy and the rights of all nations, whose graves are in shockingly uncountable numbers and those who have no graves, we condemn war and the futility of war. We repudiate and denounce violence, aggression, intimidation, threats and unfriendly behaviour.

“As Protestants and Catholics, we apologise for the terrible deeds we have done to each other and ask forgiveness. From this sacred shrine of remembrance, where soldiers of all nationalities, creeds and political allegiances were united in death, we appeal to all people in Ireland to help build a peaceful and tolerant society. Let us remember the solidarity and trust that developed between Protestant and Catholic Soldiers when they served together in these trenches.

As we jointly thank the armistice of 11 November 1918 – when the guns fell silent along this western front – we affirm that a fitting tribute to the principles for which men and women from the Island of Ireland died in both World Wars would be permanent peace.”