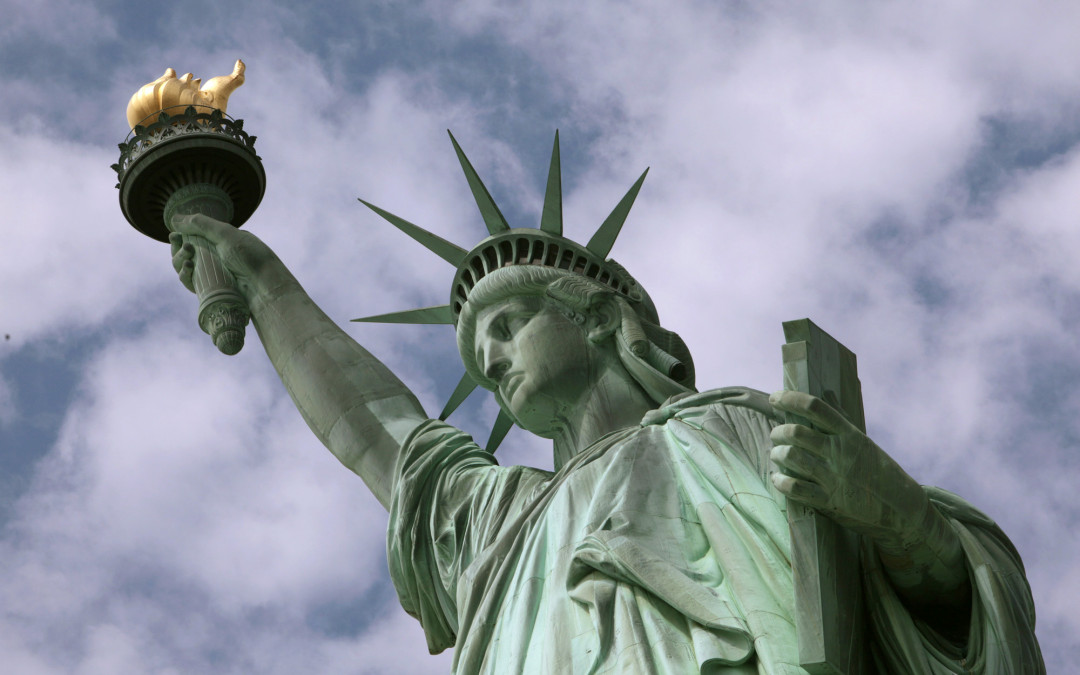 The Statue of Liberty (Liberty Enlightening the World) is a colossal neoclassical sculpture on Liberty Island in New York Harbor. The copper statue, designed by Frédéric Auguste Bartholdi, was built by Gustave Eiffel and dedicated on October 28, 1886. It was a gift to the United States from the people of France. The statue is of a robed female figure representing Libertas, the Roman goddess, who bears a torch and a tabula ansata (a tablet evoking the law) upon which is inscribed the date of the American Declaration of Independence, July 4, 1776. A broken chain lies at her feet. The statue was a welcoming sight to immigrants.

The New Colossus, a poem by Emma Lazarus, was added on a plaque in 1903:

Not like the brazen giant of Greek fame,
With conquering limbs astride from land to land;
Here at our sea-washed, sunset gates shall stand
A mighty woman with a torch, whose flame
Is the imprisoned lightning, and her name
Mother of Exiles. From her beacon-hand
Glows world-wide welcome; her mild eyes command
The air-bridged harbor that twin cities frame.

Keep, ancient lands, your storied pomp!” cries she
With silent lips. “Give me your tired, your poor,
Your huddled masses yearning to breathe free,
The wretched refuse of your teeming shore.
Send these, the homeless, tempest-tost to me,
I lift my lamp beside the golden door! 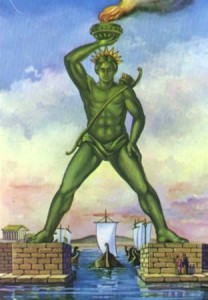 The “brazen giant of Greek fame” refers to the Colossus of Rhodes, a statue of the Greek titan-god of the sun Helios erected in 289 BCE to celebrate Rhodes’ victory over the ruler of Cyprus.