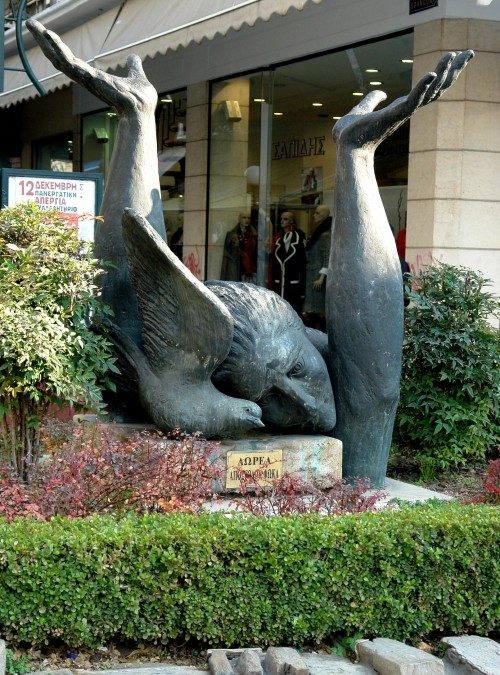 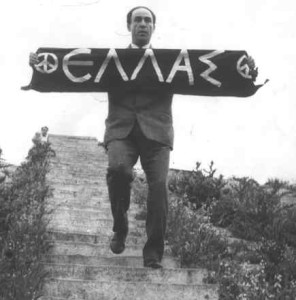 On May 22, 1963, right-wing forces ran down and killed Grigoris Lambrakis, a leftist member of the Greek Parliament, who had been speaking at a peace meeting. Vassilis Vassilikos based his novel Z on Lambrakis’s death; Costa-Gavras then adapted the novel for his film starring Yves Montand. (Z is an abbreviation of zi — (he) lives — and was a popular graffito throughout Greece after Lambraki’s death.) The bronze monument shows a figure with arms upraised, flanked by a dove of peace. It is in the exact place where he was assassinated. In his capacity as Vice President of the Greek Commission for International Détente and Peace, Lambrakis participated in international pacifist meetings and demonstrations despite frequent threats against his life. Just a month before his murder, the pacifist movement in Greece organized the First Pacifist Rally from Marathon to Athens. The police intervened, banned the rally and arrested many demonstrators. Lambrakis, protected as a member of the Greek Parliament, marched alone and arrived at the end of the rally holding the banner with the peace symbol, the one that he had previously held up during the Aldermaston rally in the United Kingdom while he was protesting near the Atomic Weapons Research Establishment.