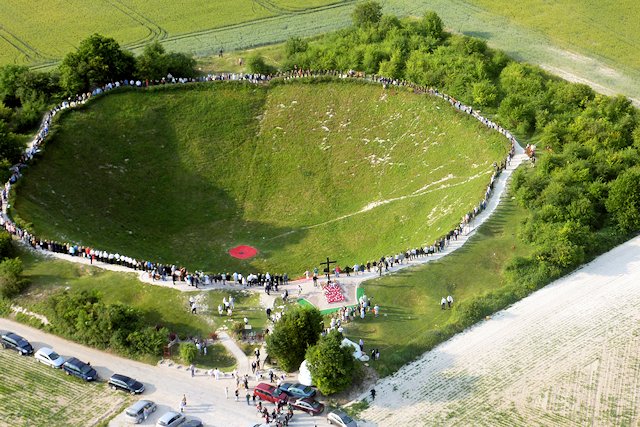 On 1st July 1916, the first day of the Battle of the Somme at La Boisselle, near Albert, France, the British Royal Engineers dug a mine and detonated 27 tons of high explosive to tunnel towards and under the German trenches and explode mines under them. A massive crater opened up. The British soldiers of the 34th Division marched in a straight line towards the German trenches and more than 6,000 were killed. The land was purchased in 1978 by an Englishman, Richard Dunning, after he read Poet Laureate John Masefield’s book about the Somme Battlefield, “The Old Front Line.” Dunning erected a memorial cross on the rim of the crater in 1986, using reclaimed timber from a Tyneside church. The site attracts about 200,000 visitors a year and there is an annual memorial service on 1 July to commemorate the detonation of the mine and the British, French and German war dead, when poppy petals are scattered into the crater. Dunning explains:

“I believe that that war especially was a stain on mankind and in some small way, Lochnagar, whilst remaining a vast, open wound on the battlefield, symbolises the eternal pain, loss and sorrow of millions of grieving people throughout Europe. A lost generation of good, gifted and innovative young men whose loss we still feel today.  I urge you to come and stand at Lochnagar and, in doing so, commemorate those who fell there. But to do so, not simply by remembering them, but by seeking to make the world that they were so cruelly denied a much more peaceful, forgiving and loving place. In their memory and in their honour.”