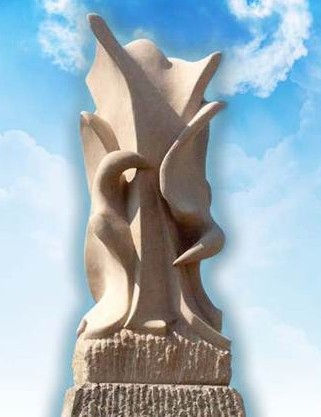 The Path of Peace sculpture, depicting three doves, is an original work of art by Ron Dinsdale and crafted from Indiana Bedford limestone. It is a joint project of Des Moines Area Community College and Iowa Peacemakers Monument, Inc. and was dedicated in September 2012. At the dedication of the statue, Des Moines Mayor Frank Cownie, a leader in the international Mayors for Peace organization, spoke about peace as a local issue. While attending an event with other mayors, Cownie said, where he was seated beside the mayors of Hiroshima and Nagasaki, he was challenged by a member of the press who asked him why the mayor of Des Moines, IA was concerned about world peace. “Let me ask you something,” Cownie replied. “If you turn to the mayor sitting next to me, and you ask him, ‘Is peace, is war, is bombing, is nuclear attack a local issue?’ What do you think he will say?” “It’s all local,” the Des Moines mayor declared.