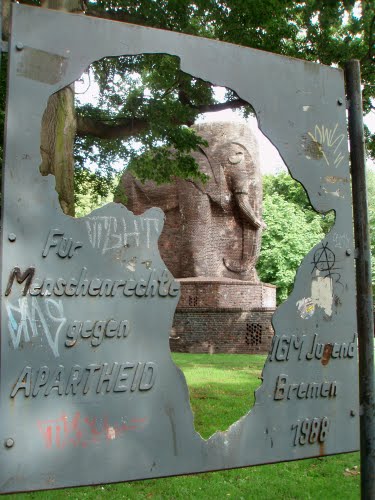 This ten-meter high structure was completed in 1931 as a monument to the German colonies which then included Cameroon, Togo, Deutsch-Ostafrika [Tanzania], Deutsch-Südwestafrika [Namibia] and several islands. For decades the “Reichskolonialehrendenkmal” stood as a powerful symbol of German colonial ambition that spanned both the Nazi era and the post-war period of reconstruction. The allied forces chiseled off the inscriptions on the outside, but the plaques on the inside of “der elefant” remained, including a list of 1,400 colonial soldiers and officials who died defending the German empire.  In 1988, a metal sign was created next to the elephant by the youth wing of the Bremen metal workers union in support of the Anti-Apartheid movement. In 1990, with the celebration of Namibian independence from South Africa, the elephant itself was re-dedicated as the “Bremen anti colonial monument” thereby attempting to invert its historical meaning yet retaining the original design. And in 2009 a new monument was created next to the elephant to the victims of German genocide: between 1904 and 1908 over 70,00 of the Ovaherero, Nama and Damara peoples of Namibia were murdered followed by an intensified phase of racial segregation that pre-figured the development of Apartheid in South Africa. The President of Namibia was present at it’s dedication.