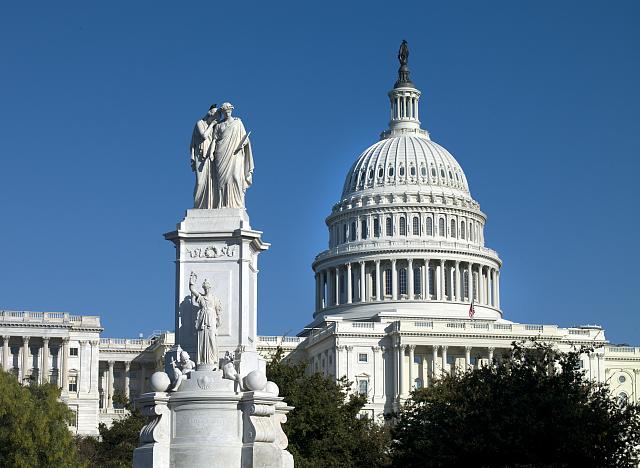 Most descriptions of the elaborate statue that stands in Peace Circle in front of the US Capitol begin, “The Peace Monument is a war memorial . . . ”  It was erected in 1877-78 to commemorate naval deaths at sea during the Civil War, and was originally intended to be sited in Annapolis. As the Architect of the Capitol describes it:

“At the top of the Peace Monument, facing west, stand two classically robed female figures. Grief holds her covered face against the shoulder of History and weeps in mourning. History holds a stylus and a tablet that was inscribed “They died that their country might live.” Below Grief and History, another life-size classical female figure represents Victory, holding high a laurel wreath and carrying an oak branch, signifying strength. Below her are the infant Mars, the god of war, and the infant Neptune, god of the sea. The shaft of the monument is decorated with wreaths, ribbons and scallop shells.

“Facing the U.S. Capitol is Peace, a classical figure draped from the waist down and holding an olive sprig. Below her are symbols of peace and industry. A dove, now missing and not documented in any known photographs, once nested upon a sheaf of wheat in a grouping of a cornucopia, turned earth, and a sickle resting across a sword. Opposite, the symbols of science, literature and art (including an angle, a gear, a book, and a pair of dividers) signify the progress of civilization that peace makes possible.”

The monument is strangely incomplete. The plans called for four dolphins spouting water into the basin. They were never added, and the water just plops out of bare holes. There are also large screws projecting from granite piers on the four corners, intended for street lamps which were never installed. There is no record of a formal dedication of the memorial, as is the custom.