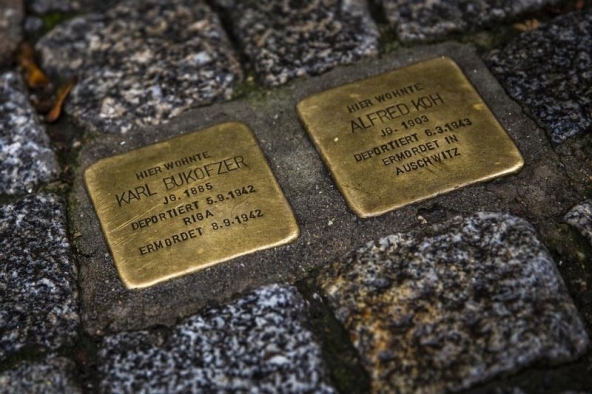 A stolperstein (literally, “stumbling blocks”) is a type of monument created by artist Gunter Demnig to commemorate victims of Nazi oppression, including the Holocaust. Stolpersteins are small, cobblestone-sized memorials for individual victims of Nazism. They commemorate individuals – both those who died and survivors – who were consigned by the Nazis to prisons, euthanasia facilities, sterilization clinics, concentration camps, and extermination camps, as well as those who responded to persecution by emigrating or committing suicide. While the vast majority of stolpersteins commemorate Jewish victims of the Holocaust, others have been placed for Sinti and Romani people, homosexuals, Jehovah’s Witnesses, black people, Christians (both Protestants and Catholics) opposed to the Nazis, members of the Communist Party and the anti-Nazi Resistance, military deserters, and the physically and mentally disabled. Stolpersteine are now in several countries and hundreds of cities and towns; more than 48,000  have been laid in 18 countries in Europe, making the project the world’s largest memorial.