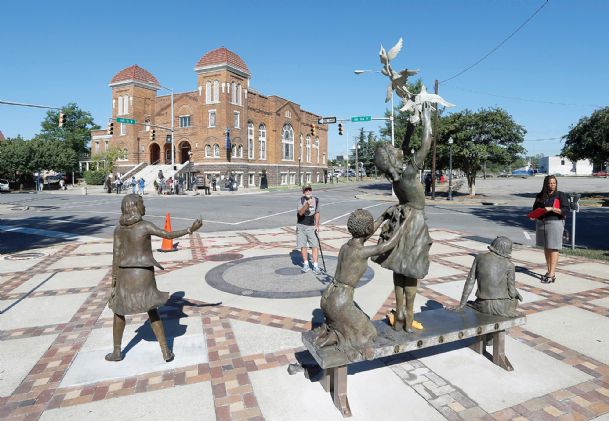 Once known as West Park, Kelly Ingram sits on a 4-acre lot in the Birmingham Civil Rights District, just across the street from both the Birmingham Civil Rights Institute and the 16th Street Baptist Church. The Park oftentimes served as a gathering place for protesters, given its proximity to the area churches, however it was the Children’s Crusade of 1963 that is most significant. As the jails became swollen with child protesters, those remaining gathered in the park and sang songs to keep their spirits lifted and the momentum going. Then police commissioner Eugene “Bull” Connor attacked the children with German Shepherds and high powered water hoses. This senseless violence against innocent children was too much for the nation to ignore. Today, Kelly Ingram Park serves as a place of remembrance, paying tribute to the martyrs via nine sculptures that tell their story to bring justice to “Bombingham.” Pictured above are the statues of the four little girls killed in the bombing of the 16th Street Baptist Church, in the background.