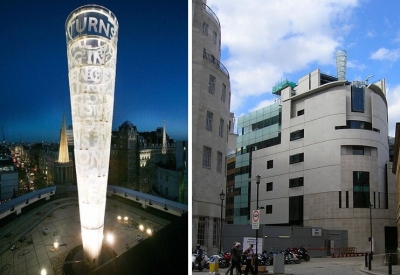 Breathing is a memorial sculpture situated on the roof of the Peel Wing of BBC Broadcasting House, in London. The sculpture commemorates journalists and associated staff who have been killed while carrying out their work. It consists of a 10-metre high glass and steel column, with a torch-like, inverted spire shape; it also features a poem by James Fenton. At night the sculpture gently glows, then at 10pm every evening (coinciding with the broadcast of the BBC ten o’clock news) the memorial shines a beam of light into the sky for 30 minutes, which reaches up to 900m. The memorial was officially unveiled on 16 June 2008 by the UN Secretary General Ban Ki-Moon. The sculpture is by Spanish artist Jaume Plensa. Jame’s Fenton’s poem:

We spoke, we chose to speak of war and strife –
a task a fine ambition sought –
and some might say, who shared our work, our life:
that praise was dearly bought.

Drivers, interpreters, these were our friends.
These we loved. These we were trusted by.
The shocked hand wipes the blood across the lens.
The lens looks to the sky.

Most died by mischance. Some seemed honour-bound
to take the lonely, peerless track
conceiving danger as a testing ground
to which they must go back

till the tongue fell silent and they crossed
beyond the realm of time and fear.
Death waved them through the checkpoint. They were lost.
All have their story here.