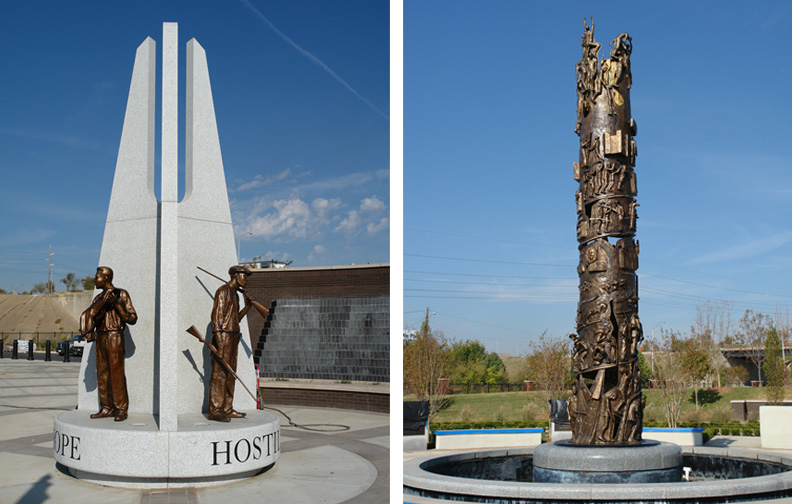 This park, dedicated in 2010, is a result of the 2001 Oklahoma Commission to Study the Tulsa Race Riot of 1921, during which a group of Whites attacked what was then the wealthiest Black community in the US. An estimated 10,000 Blacks were left homeless, and 35 city blocks were destroyed by fire. The estimated death toll ranges from 39 to about 500. The park is on the edge of the old Greenwood neighborhood, the section of town that was razed during the riot. The monuments consist of two displays: Hope Plaza and The Tower of Reconciliation. Hope Plaza is a 16-foot granite structure with three bronze sculptures depicting Hostility (an armed white man), Humiliation (a Black man with his arms raised in surrender), and Hope (a white Red Cross Worker cradling a Black child.) All three figures are based on actual people in photographs collected of the Riot. The Tower of Reconciliation is a 25-foot tower that uses images to highlight the history of African Americans, beginning with life in Africa through to the Tulsa Race Riot and reconstruction after the Riot. The Park, tower and the nearby Center for Reconciliation are named for the late John Hope Franklin, noted historian, and son of attorney Buck Franklin, who survived the Race Riot and was instrumental in assisting other African Americans in rebuilding after the events of the Riot and its aftermath.