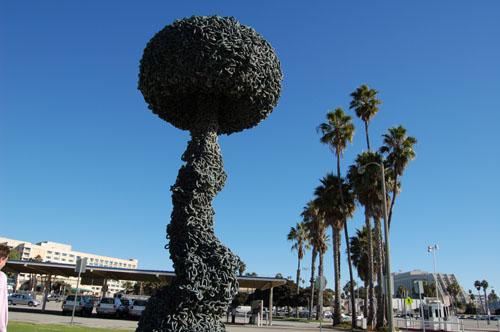 Chain Reaction depicts a mushroom cloud created by a nuclear explosion. Designed by American editorial cartoonist Paul Conrad and built by Peter M. Carlson, the 26-foot high sculpture was installed in 1991 adjacent to the Santa Monica Civic Center. An inscription at the base of the sculpture reads, “This is a statement of peace. May it never become an epitaph.” The sculpture was built with the help of an anonymous donation of $250,000, later revealed to be from philanthropist Joan Kroc, widow of Ray Kroc, the founder of the McDonald’s corporation. Joan Kroc spent millions campaigning for nuclear disarmament in the 1980s.