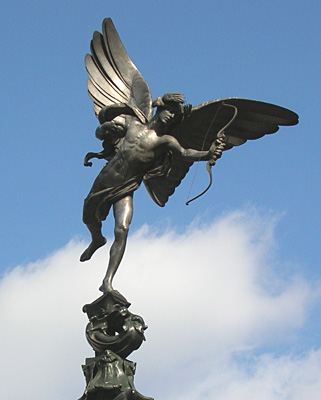 Ask a hundred people congregated at Piccadilly Circus in London, “ who’s the statue atop the fountain?” and they’ll tell you “Eros.” You know – Cupid. They’d be wrong. The god pictured is Eros’ younger brother, Anteros, who represents completed or returned love. Because of the fuss that was created because of its nudity and supposed frivolity, it was almost immediately re-named “The Angel of Christian Charity.” The fountain is dedicated to the noted philanthropist and social reformer Lord Shaftesbury. He reformed the lunacy, labor and child labor laws and was on the board of governors of the “ragged schools” which educated the poor. Lord Shaftesbury is honored (under his given name of Anthony Ashley-Cooper) together with William Wilberforce on the liturgical calendar of the Episcopal Church on 30 July for his witness against slavery.