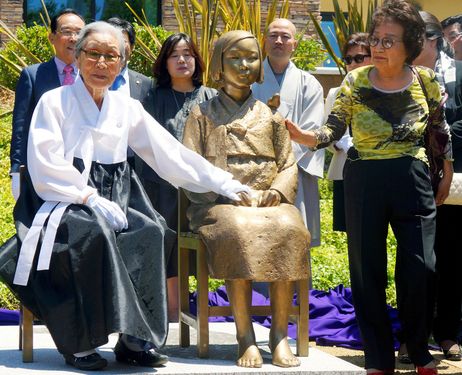 Comfort women were women and girls forced into sexual slavery by the Japanese Army since 1910, before and during World War II. Estimates vary as to how many women were involved, with numbers ranging from as low as 20,000 to as high as 410,000. Many of the women were from occupied countries, including Korea, China, and the Philippines. The last surviving victims, many in their 90s,  have become public figures in Korea, where they are referred to as halmoni, the affectionate term for ‘grandmother.’ In December, 2011, the Koreans erected the first Comfort Woman statue outside the Japanese Embassy in Seoul. It marked the 1,000th Wednesday (since January 8, 1992)  that protesters had gathered outside the embassy demanding that the Japanese issue an apology and provide compensation to the surviving victims.

The young Korean woman looks resolutely at the embassy. The empty chair represents the women who have since died, or perhaps offer a place for a halmoni to sit and rest.  Korea has been working with other countries to erect similar Comfort Women statues. Several have been erected  in the United States, some of this same design, others consisting of plaques and butterflies, the symbol of the movement.

The Japanese have been irate. A group of Japanese residents sued the City of Glendale, California, over the construction of a Comfort Women statue installed in a park there, claiming it violates the U.S. Constitution by interfering with the federal government’s authority to set foreign policy. They also claim that the mention of sex makes the entire park unsuitable for children and that it is a slur against the Japanese and that they do not promote peace. Other Comfort Women statues and memorials in the US include Palisades Park in Bergen County, NJ; Eisenhower Park, Westbury, New York; Fairfax, Virginia; Liberty Plaza, Union City, New Jersey and Southfield, Michigan. The photo above is in Glendale.