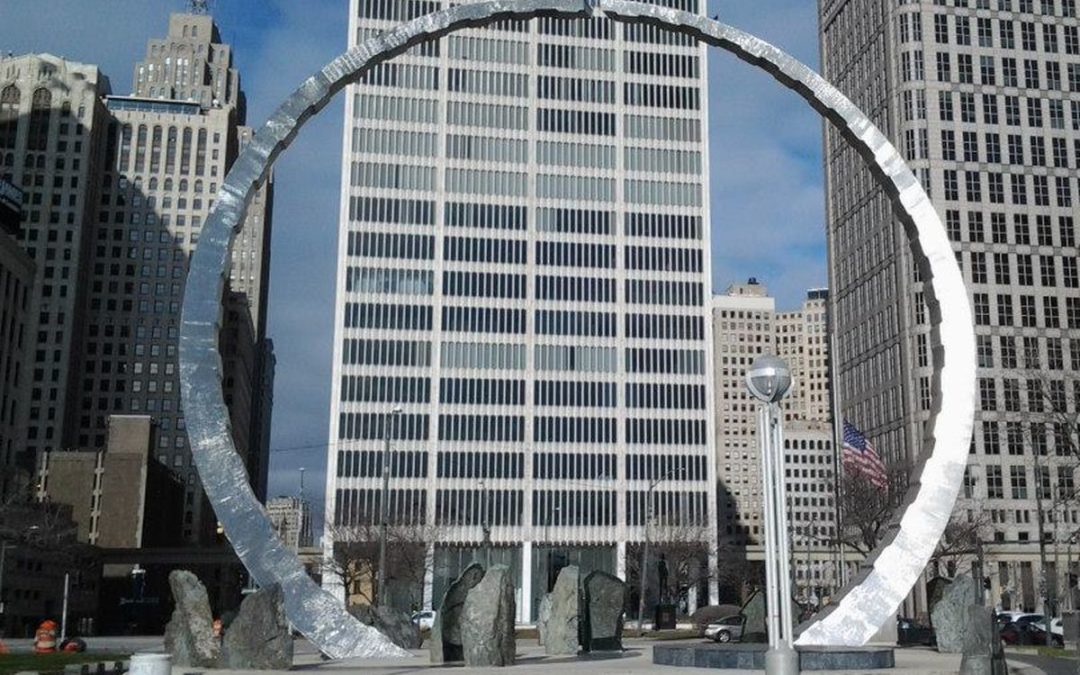 The shining arch rising 63 feet above the ground the Labor Legacy Landmark, “Transcending,” is designed to celebrate the history and contributions of labor. Dedicated in 2003 and funded through donations from union members, it is the work of local sculptors David Barr and Sergio De Giusti. From afar, the notched, rounded arch resembles the ubiquitous symbol of labor—the gear. The circular form is a symbol of inclusion. The bottom of the gear appears to merge into the earth. Barr explains: “The world drives industry and labor, and industry and labor drive the world.” There is a small gap at the top of the arch, symbolizing how far labor has come and how far it still has to go. At night the arch is made whole by lights projecting from the two disconnected ends. The arch rests on a circular, raised dais, and is partially encircled by seven granite boulders all split symmetrically in two. The boulders’ polished surfaces are adorned with De Giusti’s bronze reliefs which depict the sacrifices and achievements of labor. The piece also includes a twisting marble path. A tile at the beginning of the path is engraved with the words, “Labor’s achievements are America’s strength,” and subsequent tiles enumerate those achievements: “Free public education,” “Human rights,” “Equality for women.” Other tiles feature historical labor-related quotes such as “Without struggle there is no progress” (attributed to Frederick Douglas), and Martin Luther King’s words, “The arc of history bends toward justice.” (MLK first delivered his “I have a Dream” speech at this site in 1963, a year before he gave it in Washington, D.C.) At the spiral’s center are two boulders: one displaying chains and the other displaying hands.