Monday’s Monument: Gateway of No Return, near Ouidah, Benin 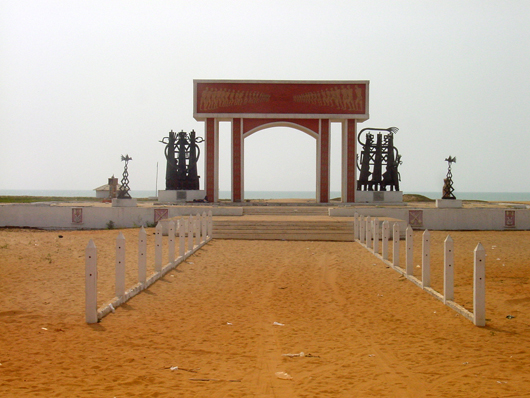 A massive, arched gateway, 50 feet high, stands alone on the edge a beach in West Africa, a monument to the hundreds of thousands of Africans who were forced into slave boats on this beach, never to return. Etched across the top of the arch are two long lines of naked, chained men disappearing into the sea. It is a two mile trek from Ouidah, The Route des Esclaves, by which enslaved people were taken to the beach by the slavers. On the way, the chained people would pass the Tree of Forgetfulness. Men would circle the tree nine times, women and children seven, and forget everything – their names, their family, and the life they had once had. Next they entered a windowless room, the Zomai, meaning “There, where the light is not allowed” where they would wait days, weeks or months for their ship to Brazil to arrive. Its foundations are still visible. Those who did not survive the Zomai were thrown into a mass grave, marked by a memorial. The two statues flanking the gate are the Revenants, ritual Voodoo dancers who welcome the souls for the dead returning home. Dozens of statues made of old motorcycle parts line the route, depicting deities and scenes from the slave trade.