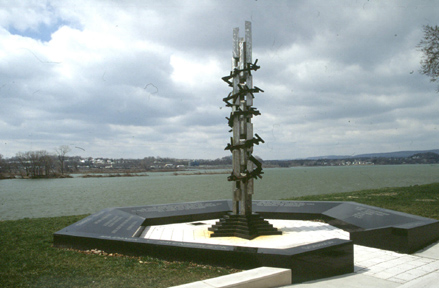 The monument was dedicated on July 17, 1994, in remembrance of the killing of millions of Jews by the Nazis during World War II. It is set upon a base of six black granite Stars of David which represent the six million Jews who perished during the Holocaust. A central three-part, stainless steel pillar represents the vitality and longevity of the Jewish people. The notion of three pillars comes from a verse of the Pirkai Avat, “The world stands on three pillars, Torah, divine service, and acts of kindness” which is considered a blueprint for Jewish life. Finally, coils of cor-ten steel wrap around most of the length of the stainless steel pillar and represents the barbed wire that kept millions of Jews enclosed within the Nazi death camps. However, the top of the pillar breaks free from the barbed wire, representing how the Jewish people survived the Nazi’s attempt to exterminate them and how they thrived after World War II. Additionally, the central sculpture is surrounded by a low, polished dark granite wall. On this wall are etched the names of various Nazi death camps and the word “remember” in 14 different languages.