Monday’s Monument: The Arts of War and the Arts of Peace, Washington, D.C. 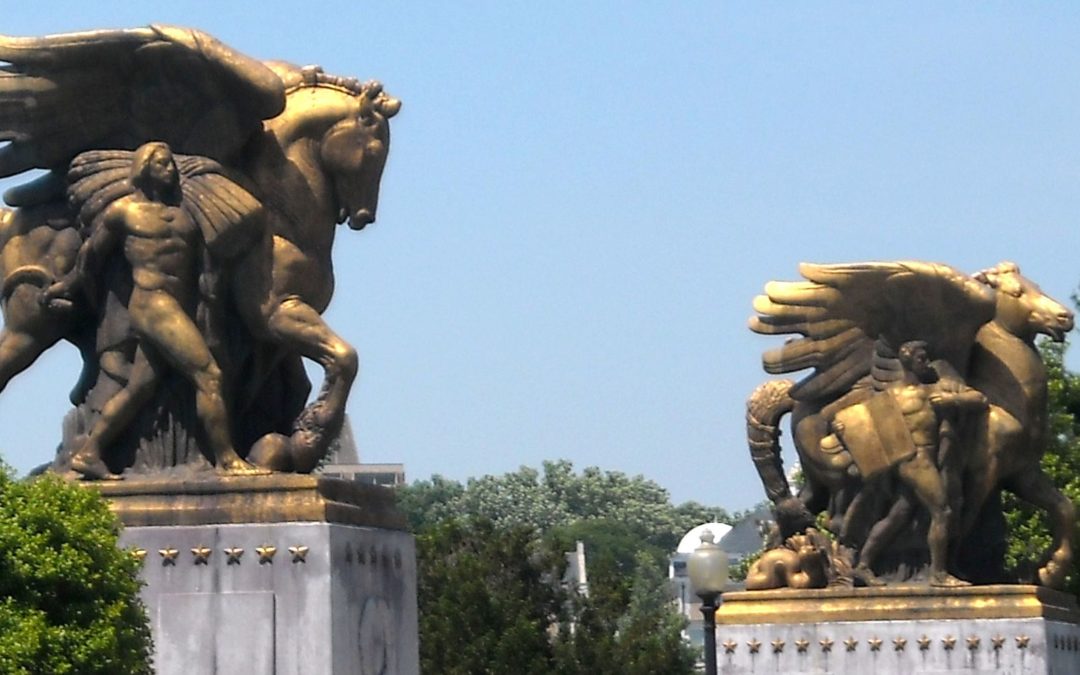 The Arts of War and The Arts of Peace are bronze statue groups on Lincoln Memorial Circle in West Potomac Park in Washington, D.C.. Commissioned in 1929 to complement the plaza constructed on the east side of the Lincoln Memorial as part of the Arlington Memorial Bridge approaches, their completion was delayed until 1939 for budgetary reasons. The models were placed into storage, and the statues not cast until 1950. They were erected in 1951.

The Arts of War were sculpted in Art Deco style by Leo Friedlander, and consists of two separate elements, Valor and Sacrifice, which frame the entrance to Arlington Memorial Bridge.

The Arts of Peace were sculpted by James Earle Fraser. The Neoclassical statuary group (with touches of Art Moderne) consists of two separate elements, Music and Harvest and Aspiration and Literature, which frame the entrance to the Rock Creek and Potomac Parkway. Pegasus, the mythological source of inspiration and poetry, is the centerpiece of both peace statue groups. Aspiration and Literature consists of a nude male on Pegasus’ right with a toga over his left shoulder and an open book in his trailing right hand (symbolic of literature), and on Pegasus’ left a nude male (both shoulders draped with a toga) aiming a bow backward (symbolic of aspiration). A serpent trails behind the personification of literature, symbolizing wisdom and knowledge. Music and Harvest consists of a nude male on Pegasus’ right holding a sickle and carrying a sheaf of cut wheat over his shoulder (symbolic of harvest), and a semi-nude female on Pegasus’ left holding a harp in her trailing left hand (symbolic of music). Behind the woman is a turtle, symbolizing the belief that “art is long and time is fleeting.”