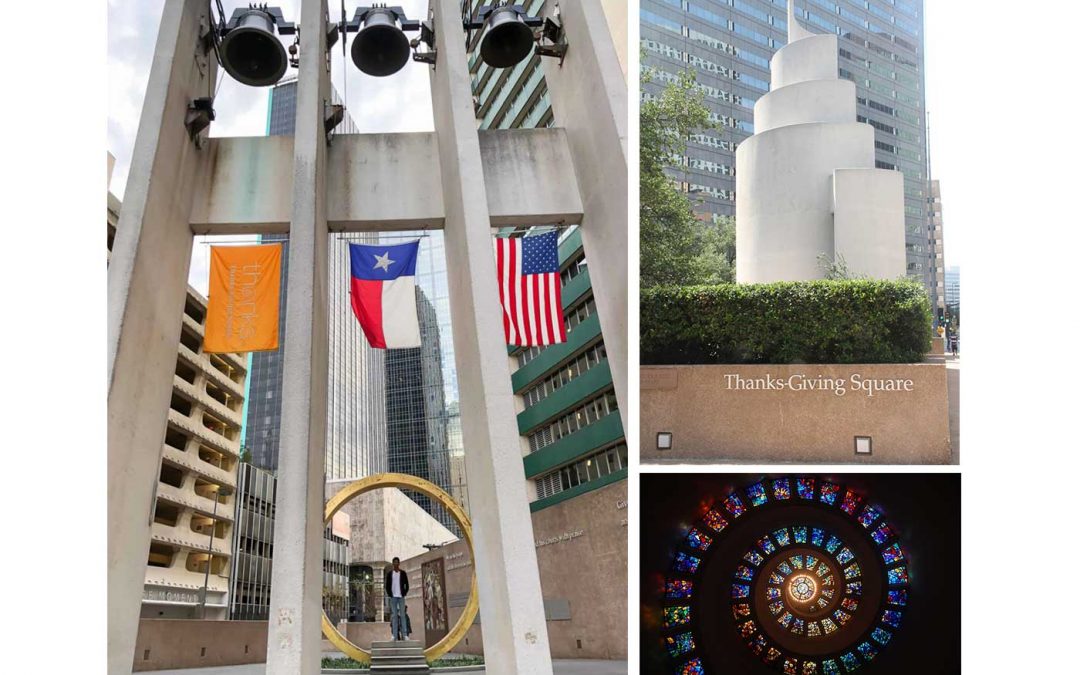 In 1964, four businessmen — Joe O. Neuhoff, Julius Schepps, John M. Stemmons, and Peter P. Stewart — wanted the City of Dallas to be known “not only for its worldly aspirations and economic accomplishments, but also for the enduring heart of its citizens.”

The Thanks-Giving Foundation was chartered to create a public space in the heart of the city dedicated in gratitude to God and to the “most ancient and enduring of American traditions.” The foundation worked with the City of Dallas to acquire land in 1968. Construction began in 1973. The Chapel of Thanksgiving and the Bell Tower, designed by architect Phillip Johnson, were dedicated on Thanksgiving Day, 1976. The remainder of the grounds opened in 1977, two hundred years after General George Washington proclaimed the first national Day of Thanksgiving on request of the Continental Congress.

The Square is set fifteen feet below ground level with a four-foot wall blocking the sight of automobiles to create a serene, green island. Throughout the square there are fountains, which also serve to block traffic noise. At the western end of Thanks-Giving Square rises the bell tower (on the left in the photo above). Called “The Court of All Nations,” it celebrates gratitude and thanksgiving as a human value present in cultures around the world. Three great bronze bells call the world daily to celebrate in thanksgiving. Each bears an inscription from Psalms. The high bell states “God Loves Us” (Psalm 136), the middle bell “We Love God” (Psalm 150), and the deepest bell “Serve God Singing” (Psalm 98).

You walk up the ramp to Norman Rockwell’s Golden Rule mosaic and Ring of Thanks (you can see the mosaic on the right within the Ring of Thanks — the man in the photo is actually walking out of the park.) The mosaic was installed in 1985, on the 40th anniversary of the United Nations. The text on the wall leading up the the mosaic is taken from Psalm 100:

Make a joyful noise unto the Lord, all ye lands.
Serve the Lord with gladness: come before his presence with singing.
Know ye that the Lord he is God: it is he that hath made us, and not we ourselves; we are his people, and the sheep of his pasture.
Enter into his gates with thanksgiving, and into his courts with praise: be thankful unto him, and bless his name.
For the Lord is good; his mercy is everlasting; and his truth endureth to all generations.

The path will lead you into the Center Court of Praise, a community gathering place. The Grove is a place of quiet contemplation. It contains the Wall of Presidents, a special display area celebrating the prayer and thanksgiving words of American presidents. President George HW Bush dedicated the wall in 1991.

The Chapel of Thanksgiving (pictured in to topmost photo) is the spiritual center of Thanks-Giving Square, open to visitors of all faiths. The spiraling shape rises 90 feet above street level, suggesting the infinite upward reach of the human spirit. The Chapel’s design takes its inspiration from the Great Mosque in Samarra, Iraq and the ancient spiral of life. The entrance to the chapel is at the end of a bridge that runs over a cascading waterfall. The chapel ceiling contains the stained glass “Glory Window”, one of largest horizontally mounted stained-glass pieces in the world. (Also pictured in the topmost photo.) The 73 panels of faceted glass were designed by Gabriel Loire of Chartres, France featuring warmer and brighter colors as the spiral reaches its apex in the center.

Below the chapel is the Hall of Thanksgiving, which tells the story of the American Thanksgiving tradition. The Hall of Thanksgiving is the exhibition, meeting, and resource center for Thanks-Giving Square. The hall is a venue for lectures, interfaith meetings, and educational programming. Artifacts on display include the Book of Prayers and Presidential Proclamations.