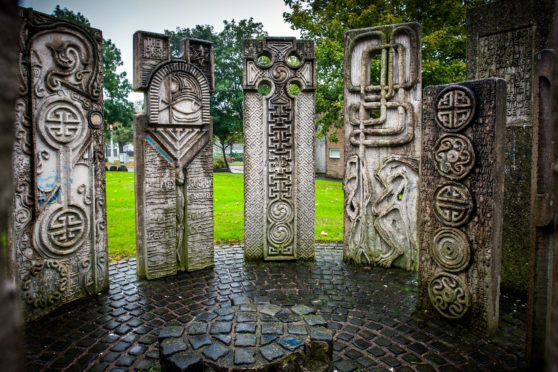 This circular henge sculpture by David Harding is comprised of 13 concrete slabs in spiral formation, gradually increasing in height from 2.0m to 2.75m. The inside faces of the henge in are in relief, each with a different decorative relief molding. References include Pictish and Celtic symbology and 20th century figures including Che Guevara, Gandhi, Martin Luther King and Mother Theresa. It was dedicated in 1970.

The work is designed so that it must be entered to be appreciated. The largest stone features a quote from Gandhi: “Man’s best monument is not a thing of stone but consists in living deeds and in the memory which survives in the minds of those he served.” The smallest includes Celtic discs and the titles of songs by Bob Dylan and The Beatles.

Another pillar contains lines from the Welsh poet Dylan Thomas: “Do not go gentle into the good night / Rage, rage against the dying of the light.”

The work was inspired by the Neolithic stone circle at nearby Balbirnie which was uncovered in 1950 and relocated here in 1970, when the original site, 125 km to the northwest, was dug up for construction of a highway.

Glenrothes, a city in Fife of about 40,000, is halfway between Edinburgh and Dundee in the southeast of Scotland. Opened in 1948 as one of Scotland’s first post-second world war new towns, its original purpose was to house miners who were to work at a newly established coal mine. It is now part of Scotland’s “Silicon Glen.” In 1968 Harding was hired as Scotland’s first “town artist,” which he described as producing contextual art in collaboration with the community; today we might call it “placemaking.”