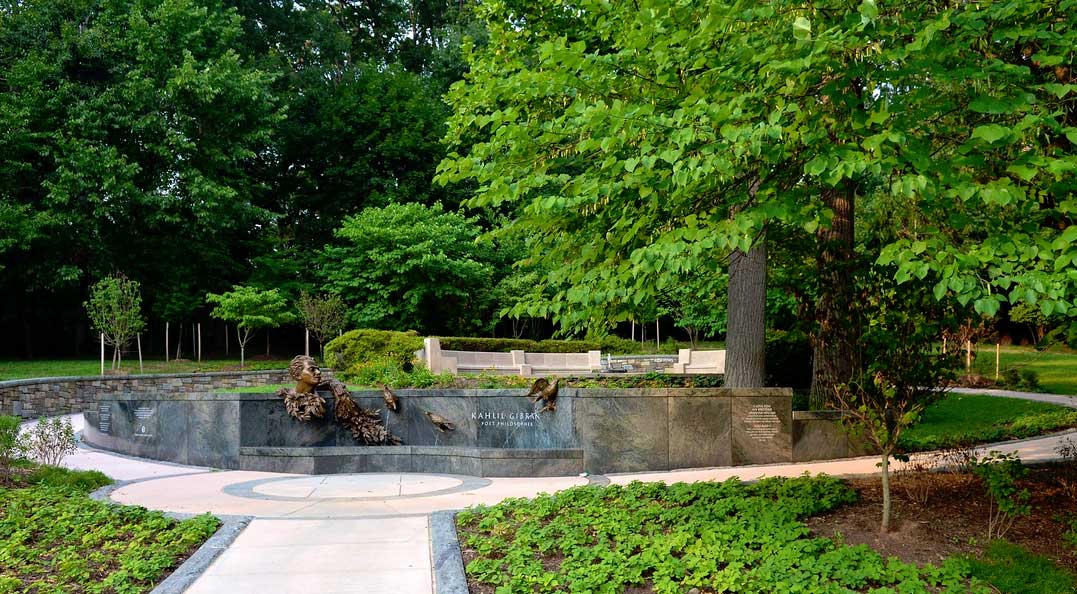 The Memorial to the Lebanese poet Kahlil Gibran is a peaceful, recessed 2-acres on Massachusetts Avenue across from the British Embassy, halfway up the hill which connects the city’s principal mosque with the National Cathedral. Congress set aside the land, and the American Enterprise Institute chairman, Lebanese-American William J. Baroody Jr., led the effort to raise $1 million to build the park. It was opened by then-President George HW Bush in 1991.

The memorial garden was a project of the Kahlil Gibran Centennial Foundation, established in 1983 to celebrate the 100th anniversary of the poet’s birth.

The centerpiece of the memorial is a bust of Gibran by Gordon Kray, emerging from a wall at the entrance, which is reached by crossing a small bridge. A star-shaped fountain is surrounded by flowers, hedges and limestone benches engraved with various quotes from the poet. Islamic designs on granite are patterned after those found at the Beiteddin Palace in Lebanon.

Why a tribute to Gibran? He may be America’s favorite poet. Americans have bought more than 8 million copies of just one of his books, “The Prophet,” since it came out in 1923. Also, the dedication in 1991 was in the midst of the First Gulf War, when a tribute to a gentle Arab was a generous reminder of our common humanity.