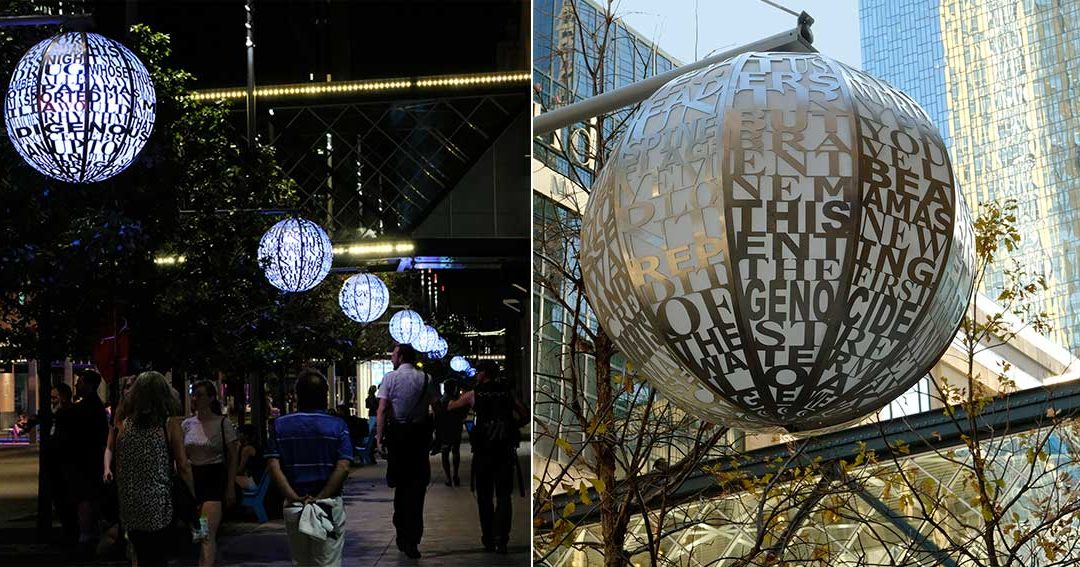 The Nicollet Lanterns feature twelve original poems by Sagirah Shahid, Moheb Soliman, R. Vincent Moniz, Jr. (Nu’Eta) and Junauda Petrus. Each poet wrote three poems of approximately 100 words. The lanterns, created by Blessing Hancock, were part of a 2015-2017 renovation of a 12-block stretch of Nicollet Avenue, the shopping and dining district of the city, a pedestrian and transit mall. A transit mall is a street, or set of streets, in a city along which automobile traffic is prohibited or greatly restricted and only public transit vehicles, bicycles, and pedestrians are permitted. Originally converted in 1967, it was the first such mall in the United States.

San Antonio folk may recognize Blessing Hancock as the Arizona artist who created the “Ballroom Luminoso” chandeliers, made of recycled bicycle parts, that hang under the I-35 underpass at Theo & Malone.

The globes are four feet across and made of stainless steel, lined with acrylic. There are LED lights within to make them glow at night. The lines of poetry run horizontally around the globes, but, at different angles as you walk past, the text recombines into “word-clouds.” New word connections emerge every time you see the work.

In the top photo, the lantern on the right incorporates this poem by Sagirah Shahid:

We shouldn’t have to say
Thirteenth amendment couldn’t protect us
from the war on drugs,

we still want a new flag:

We want this new flag
on bended knee and repenting,
the old one lost all credit the first time
it racked up the debts of genocide,

All of the poems can be read online here.