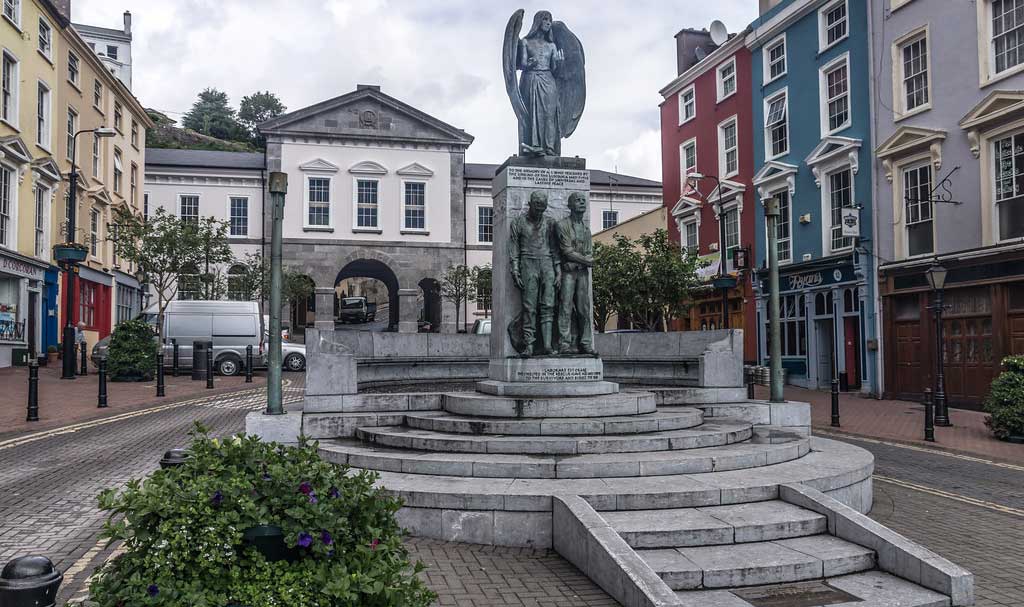 The RMS Lusitania, a ocean liner of the Cunard Line, was torpedoed by a German U-boat in 1915 and sunk 18 minutes later. 1,198 were killed; there were 761 survivors. Many of the survivors and bodies of the deceased were rescued or recovered by local fishermen from Cobh (then known as Queenstown.)

The memorial was commissioned by an international committee and sculpted by Jerome Connor. Atop the memorial is the Angel of Peace. At the feet of the angel are the word in Irish “Siochain in Ainm Dé” meaning “Peace in God’s Name.” Below the angel stand statues of two exhausted fisherman representing those local men who tirelessly tried to recover as many survivors as possible and recovered many victims for burial. The memorial is inscribed: Siochain in Ainm Dé \ To The Memory Of All Who Perished By \ The Sinking Of The Lusitania May 7 1915 \ And In the Cause Of \ Universal And \ Lasting Peace \ Laborare Est Orare \ They Helped In The Rescue. Gave Aid And Comfort \ To The Survivors And Buried The Dead.

Laborare Est Orare, Pray and Work, refers to the Catholic monastic practice of working and praying, generally associated with its use in the Rule of Saint Benedict.

The pedestal and the two fishermen were placed in 1952 and the memorial stood many years unfinished. On the initiative of sculptor Domhnall O’Murchada (Donal Murphy), who had salvaged the wax model of the Angel of Peace from Connor’s studio, the Angel was finally cast and placed on the monument in 1970.