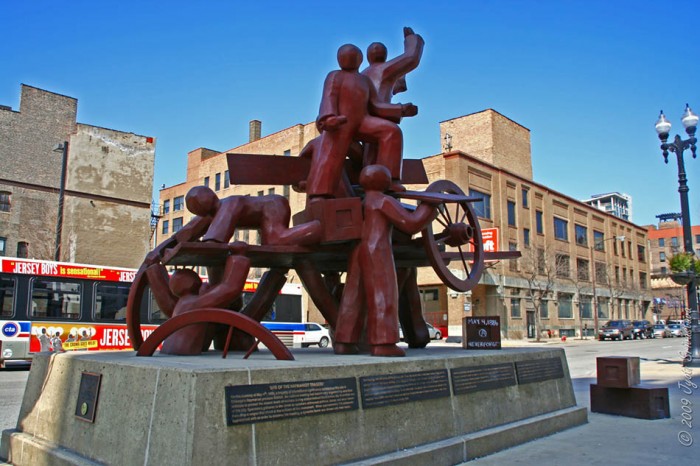 This statue in Haymarket square is the culmination of more than a century grappling with the meaning of the Haymarket Riot.

On May 4, 1886, a labor rally near Chicago’s Haymarket Square turned into a riot after someone threw a bomb at police. At least eleven people died, including seven policemen. Despite a lack of evidence against them, five radical labor activists were convicted and hanged in connection with the bombing. The Haymarket Riot was viewed a setback for the organized labor movement in America, which was fighting for such rights as the eight-hour workday. At the same time, the men convicted in connection with the riot were viewed by many in the labor movement as martyrs. Two monuments with opposing narratives (pictured below) were quickly erected.

In 1899, at the site of the riot itself, a nine-foot bronze statue of a Chicago policeman by sculptor Johannes Gelert was erected in the middle of Haymarket Square with funds raised by the Union League Club of Chicago. On the 41st anniversary of the Haymarket affair, a streetcar jumped its tracks and crashed into the monument; the motorman said he was “sick of seeing that policeman with his arm raised.” The city restored the statue in 1928 and moved it to Union Park. During highway construction in the 1950s it was again moved to a special platform overlooking the Kennedy Expressway. The statue was vandalized with black paint on the 82nd anniversary of the Haymarket affair, following a confrontation between police and demonstrators at a protest against the Vietnam War. In 1969, shortly before the “Days of Rage” protests, the statue was destroyed when a bomb was placed between its legs. The Weatherman took credit for the blast. Rebuilt in May, 1970, the Weathermen blew it up again in October. Again rebuilt, in 1972 it was moved to the lobby of the Central Police Headquarters, and in 1976 to the enclosed courtyard of the Chicago police academy. In 2007 the statue was rededicated at Chicago Police Headquarters, where it remains.

Following the Haymarket affair, trial and executions, the five dead defendants—George Engel, Adolph Fischer, Louis Lingg, Albert Parsons, and August Spies—were buried at the German Waldheim Cemetery (later merged with Forest Home Cemetery) in Forest Park, Illinois, a suburb of Chicago. When they died, defendants Oscar Neebe and Michael Schwab were also buried at Waldheim. The Pioneer Aid and Support Association organized a subscription for a funeral monument. In 1893, the Haymarket Martyrs’ Monument by sculptor Albert Weinert was raised at Waldheim. It consists of a 16-foot-high granite shaft capped by a carved triangular stone. There is a two step base, which also supports a monumental figure of a woman standing over the body of a fallen worker, both in bronze. It was dedicated on June 25, 1893, after a march from Chicago. The inscription on the steps read, “1887”, the year of the executions. Also, there is a quote attributed to Spies, recorded just before his execution by hanging: “The day will come when our silence will be more powerful than the voice you are throttling today.” On the back of the monument are listed the names of the men. On the top of the monument, a bronze plaque contains text of the pardon issued in 1894 by Illinois governor John Peter Altgeld.

On September 14, 2004, Mayor Daley and union leaders—including the president of Chicago’s police union—unveiled the monument pictured above by Chicago artist Mary Brogger. Nathan Mason, the official of the cultural affairs department who directed the project told New York Times reporter Stephen Kinzer, “I think we’re showing a new way to do monuments at historic sites. You make them open rather than pressing a precise meaning on people or directing them toward a specific feeling or reaction.”  A plaque at the base of the monument says, “Over the years, the site of the Haymarket bombing has become a powerful symbol for a diverse cross-section of people, ideas and movements. Its significance touches on the issues of free speech, the right of public assembly, organized labor, the fight for the eight-hour workday, law enforcement, justice, anarchy, and the right of every human being to pursue an equitable and prosperous life.”  The Haymarket speakers spoke from a wagon borrowed from a nearby factory. Artist Mary Brogger told the Times’ Kinzer, “I was pretty adamant in my own mind that it would not be useful to depict violence, The violence didn’t seem important, because this event was made up of much bigger ideas than one particular incident. I didn’t want to make the imagery conclusive. I want to suggest the complexity of truth, but also people’s responsibility for their actions and for the effect of their actions.”

I’ve wrestled with the appropriateness of including monuments to liberation struggles in this compendium of peace and justice monuments because so many of them commemorate and ultimately celebrate armed struggle. Where is the peace in that?  These statues are neither peaceful nor nonviolent; they do, however, commemorate acts of justice and are deserving of study.