Monday’s Monument: Statues on the Facade of the Museo Polifacético Rocsen, Nono, Argentina 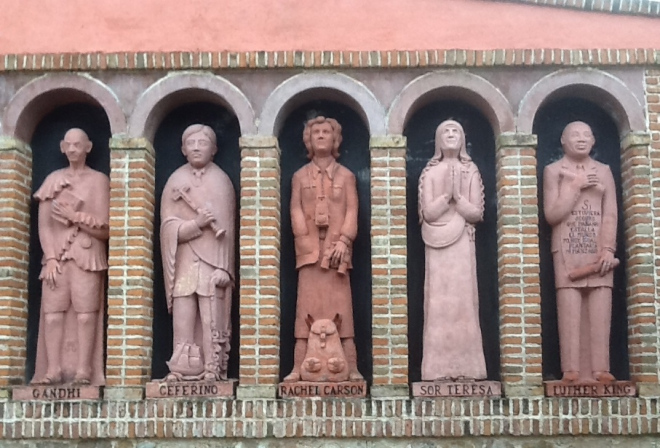 “I represented an “Evolution of Thought” beginning with the Africanus (5 million years old) and ending with Martin Luther King (Nobel Peace Prize 1964) ) and wanted to realize it on a predominantly pacifist and humanistic line, including only mystics, philosophers, artists and scientists. I selected these representatives of humanity because I did not want there to be signs of violence and death on the front of the museum, that there would be no blood in my work but that every light would shine. This is the reason why I did not model for example a Caesar or a Napoleon. Each chosen character represents different human beings endowed with similar characteristics. Therefore, a statue represents a creed, an art, a continent, etc. . . . I have not made this sculptural work with the goal of acquiring a reputation as a sculptor but I have simply wanted to leave a message of peace shaped in my own way. Only culture, peace and love can end human suffering.”

This museum of curiosities and human learning contains more than 50,000 items. The museum was opened in 1969; Bouchon spent eight years sculpting the statues. Among the peacemakers picturees are Chief Seattle, St. Francis of Assisi, Gandhi, Mother Teresa and Martin Luther King, Jr.