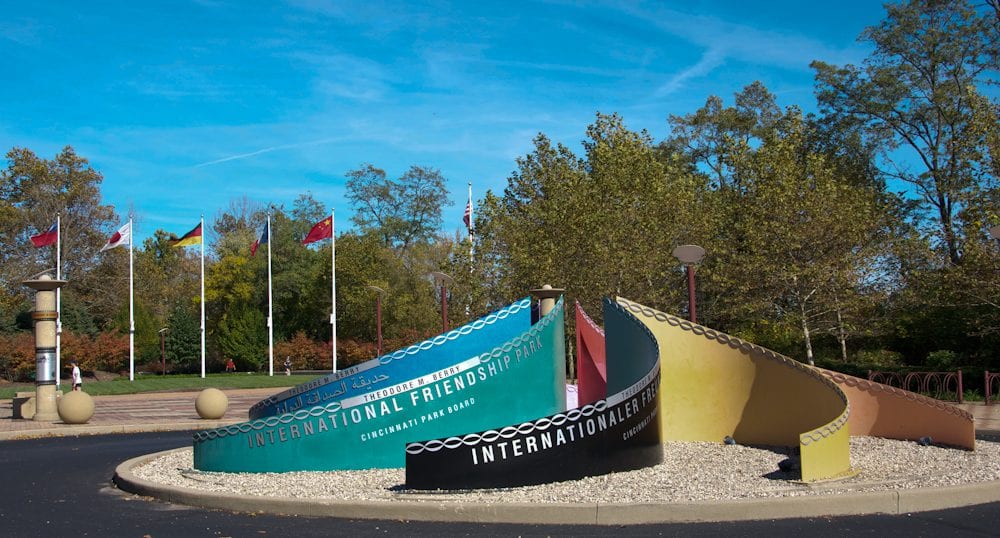 The Theodore M. Berry International Friendship Park, completed in 2003 in what was wasteland along the Ohio River just east of downtown, is an award-winning display of sculpture and flora representing five continents and also featuring a riverside bike trail and walking paths.

Named for Cincinnati’s first African-American mayor, it serves as a lasting tribute to world unity and global understanding. The Design of the park drew its inspiration in part from a child’s friendship bracelet. Two intertwining walkways guide park visitors through gardens of the continents in a perpetual celebration of international peace and friendship.

The bracelet includes two interwoven paths designed to symbolize the paths of man and nature, while also encouraging people to meet. Throughout the park, the landscape and graphics honor the cultural and natural symbols of different continents. Each intersection has a garden identification featuring a cast bronze medallion inlaid with symbology from that culture. Along the paths, iconography is cast into concrete artfully textured with plant and animal prints indigenous to that continent. The charms were designed to honor earth, wind, fire, and water and were conceived as sculptural features.

The park entrance is highlighted with a 24-foot wide flowing pinwheel sculpture. Each aluminum fin emerges from the landscape in a multicultural array of color. The park name appears as a jewel-like braid with the word “welcome” in eight languages. The columns punctuate the plaza, honoring the park’s namesake.