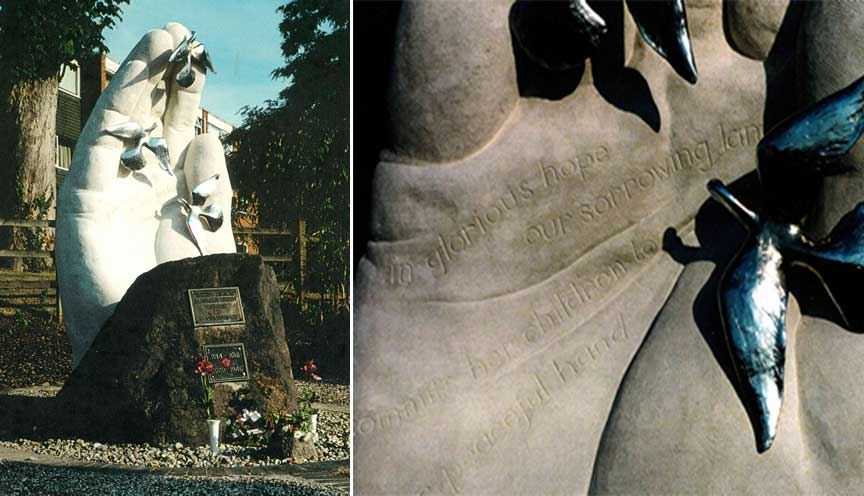 Rose Garrard was commissioned in 1998 to create this sculpture to draw attention to an existing commemorative stone on a war memorial site in Barnard’s Green, which was neglected and regularly vandalized. She researched and developed the designs in consultation with elderly members of the local British Legion and in workshops with teenagers at the nearby Malvern Youth Centre.  The Legion first proposed a conventional bronze soldier, although they felt this might soon be overlooked, but the teenagers suggested that whilst remembering the war dead, the emphasis should be on celebrating peace.

According to the artist, the three metre high “Hand of Peace” was inspired by memories, photos and memorabilia kept by the old soldiers, some the grandparents of the teenagers; – the poignant hands of the youthful dead in images of 20th century battlefields, and the flight of the three chrome-plated doves of peace, suggested by a picture of fighting Spitfires in the Battle of Britain. Carved across the palm of the hand are four lines taken from a poem ‘Silence’, found in a 1946 leaflet of the first Commemoration Service for the dead after the Second World War, kept by one British Legion member.

The Hand of Peace was carved from a huge block of Portland Stone. It was dedicated in 1999.