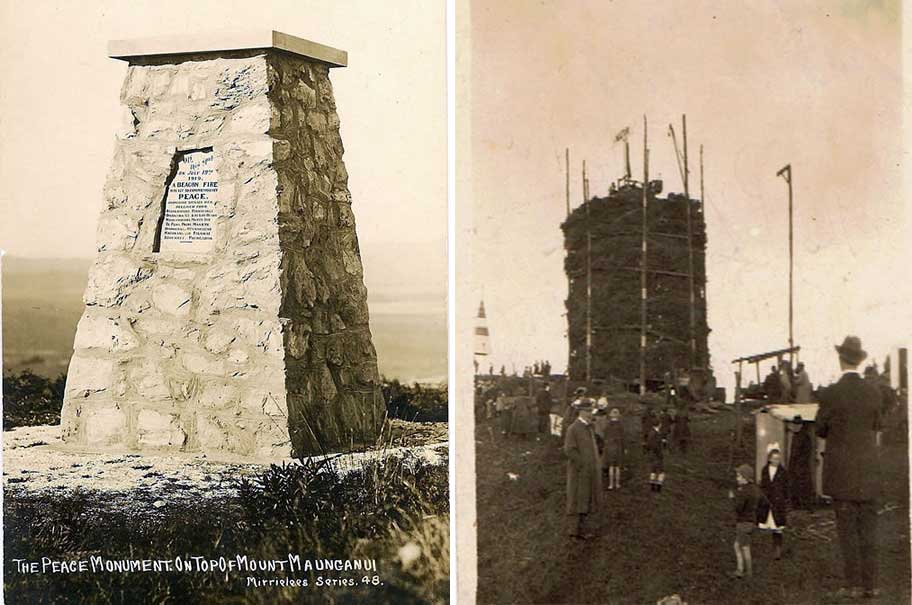 To celebrate peace at the end of World War I, the Boy Scouts proposed lighting beacon fires across the British Empire. The idea was inspired by the words of Sir Edward Grey on August 3, 1914, who looked out of his window in London at dusk and remarked: “The lamps are going out all over Europe; we shall not see them lit again in our lifetime.” Between 11 p.m. and midnight on Saturday 19 July, 1919, the British countryside was aflame with bonfires from John o’ Groats in the far north of Scotland to Land’s End, the south-west tip of England. (The Treaty of Versailles, officially ending the war, was signed in June of that year.)

Beacons were lit in New Zealand, too, on 16 prominent sites across the Bay of Plenty, a 260 mile stretch on the northern coast of New Zealand’s North Island. At Mt Maunganui the beacon fire was placed on the summit of Mauao. Locals carried Australian hardwood and 70 tar barrels up to the summit. Rockets were fired at 7.30 p.m. and the pyre was lit half an hour later. (The pyre is pictured in the photo on the right.)

Several months later, this memorial made of New Zealand marble was carried up to the site by the same group that had hauled the material for the beacon fires. The inscription reads: