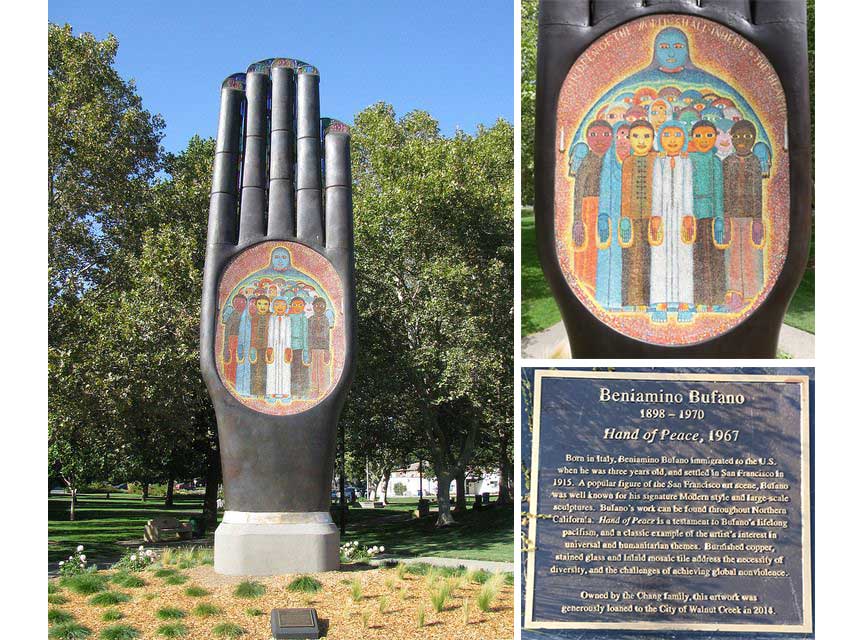 “Hand of Peace” by Benjamin Bufano, is made of copper, mosaic and stained glass. The 30-foot-tall open-hand figure has stained glass around the fingers and a mural in the middle of the palm featuring a group of children. Above them, an inscription reads, “The children of the world shall inherit the earth.”

Bufano originally made the sculpture in 1967 for the San Francisco Arts Commission but the deal went sour. It was auctioned off and bought by a developer in Walnut Creek and displayed in an office park. The Chang family, which currently owns the sculpture, felt it should be displayed more prominently. They have loaned it to the city for 25 years, where it has been installed in Civic Park since 2012. A spokesman for the Chang family said, “The family tends to think in generational terms; that’s why it’s a 25-year term. It will be up to the next generation, the grandchildren, to decide if they want to extend it.”

We’ve written previously about Bufano’s St. Francis of the Guns, in San Francisco. He was a well known pacifist who, during World War I, allegedly cut off his trigger finger and mailed it to President Woodrow Wilson.