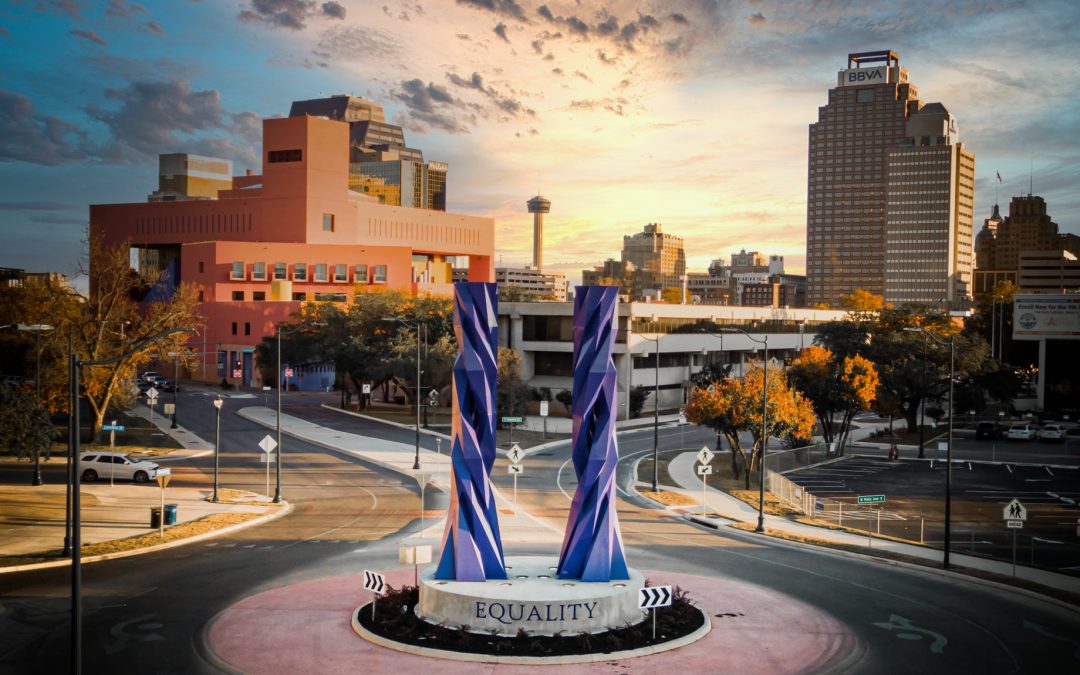 The Door of Equality (La Puerta de Igualdad) is the latest gateway sculpture by the artist Sebastian and is a gift to the City of San Antonio from Fundación Sebastian and Siempre México to commemorate the city’s rich civil and human rights history. The sculpture stands at a monumental 33-feet tall and is a bright cobalt blue, adding more even more color to the already vibrant downtown skyline.

The “Door of Equality,” unveiled on October 26, 2020, is located in the center of the San Pedro roundabout, a block north of San Antonio Central Library.

The sculpture symbolizes the infinite struggle for justice with two, tightly wound, geometric pillars that stand side by side. The sculpture is lit from within, marking the first time the artist incorporates light into his work and giving off a perpetual glow that speaks to the fire and energy surrounding the City’s tenacious history. Set as a gateway between downtown and other areas of the City, the sculpture symbolizes that San Antonio’s door is always open.

The torqued twisted steel columns showcase the grind of the work done by human rights champions in San Antonio. These pillars are equal in strength and beauty representing the vision of equality. Each column is royal blue, with the first representing peace, tranquility and wisdom and the second column standing for loyalty, strength, and trust.

“With the current climate we are living in, one where walls are being proposed, I wanted to create a work that speaks to the importance of keeping doors open and being vigilant about true equality,” said Sebastian.

The gift is a donation of $800,000 jointly made by the Fundación Sebastián and Siempre Mexico, a business organization founded by Alex Quiroz, who also led the Mexican empresarios association that brought the Torch to San Antonio in 2002. The City’s contribution will be $160,000, to create the support infrastructure necessary to house the sculpture, including electricity for lighting, a platform, and a small sitting area dedicated to civil rights organizations founded in San Antonio — Mexican American Legal Defense and Educational Fund (MALDEF), and League of United Latin American Citizens (LULAC).