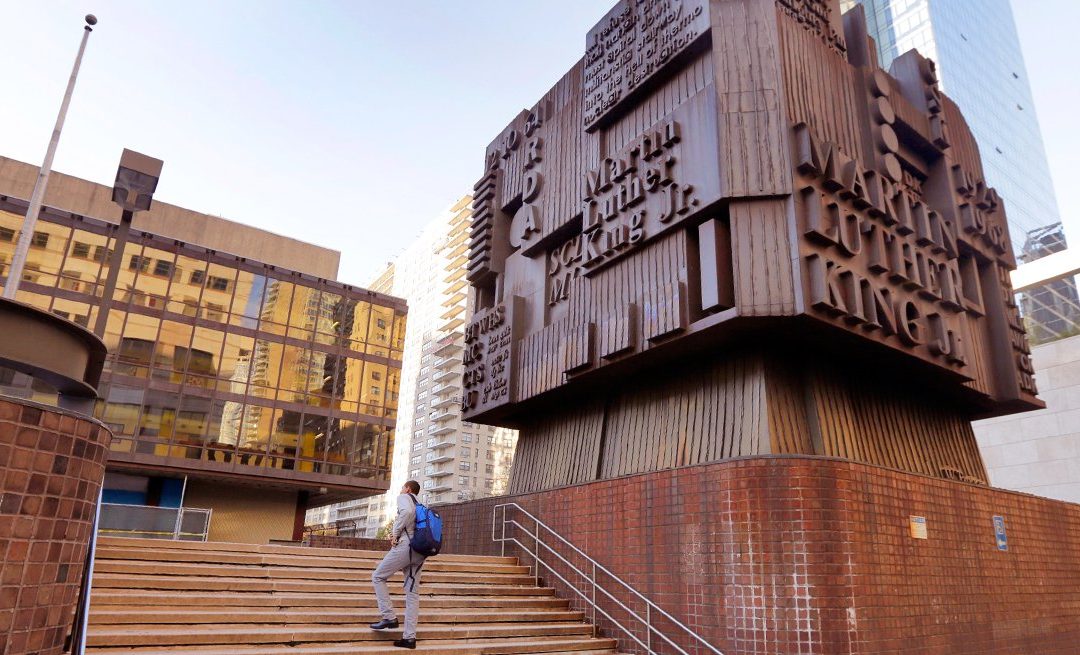 William Tarr’s 1974 weathering Cor-Ten steel black sculpture stands atop the plaza of Martin Luther King Jr. High School down the street from Lincoln Center on the Upper West Side at 66th and Amsterdam. All four sides of this cube include important dates in the life of the civil rights leader as well as famous quotes.

The cube is also covered with lots of cryptic initials. BTWHS/MC/CTS/BU is a list of his schools: Booker T. Washington High School, Morehouse College, Crozer Theological School and Boston University. SCLC/MIA are the Southern Christian Leadership Conference and the Montgomery Improvement Association. On another side are the initials of his family: CSK is Coretta Scott King, and and a block with his four children: Yolanda King, Martin Luther King III, Dexter King and Bernice King. ‘RDA stands for the Rev. Ralph D. Abernathy; ‘JJ for the Rev. Jesse Jackson and ‘BR for Bayard Rustin. Among the dates in his life are 12/10/64, for his acceptance of the Nobel Peace Prize and 4/4/68 for the date of his assassination.

The High School, which had an unfortunately ironic reputation for violence, was closed in 2005 and re-visioned as the Martin Luther King Jr. Educational Campus, which houses seven separate high schools which operate on different floors of the building, including the High School for Law, Advocacy, and Community Justice.