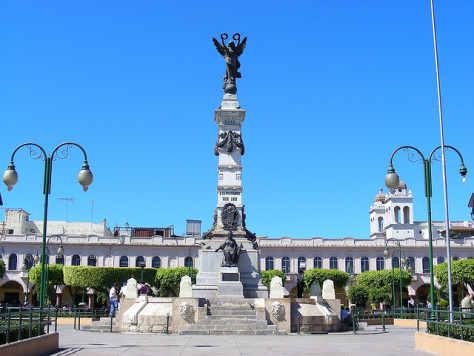 A year after the more famous Mexican Grito de Dolores on September 16, 1810, Central America also shouted for freedom and liberty, in El Salvador. This monument marks that occasion, on November 5, 1811. Manuel Jose Arce proclaimed in a speech in what is now Libertad Park that “There is no King, no Intendent, no General Captain, we only owe allegiance to our Acalde!” This initial proclamation was put down by the Spanish with the arrest and dispersal of those seeking independence. Independence from Spain was finally gained on September 15, 1821 after ten more years of struggle.

The east face of the monument is dedicated to Dios (God); the north face to Patria (Country); the west face to Libertad (Freedom) and the south face to Unión.

The photo above is of the south face, picturing Manuel José Arce. It includes a bas relief called “Un Cabildo Abierto” (“The Forum of the Insurgents”) which was added on the 150th anniversary in 1961.

The photo below is of the east face, engraved with the names of brothers Nicolas, Vicente y Manuel de Aguilar, all priests.

The west face contains the main plaque: “The Republic of El Salvador erects this monument in Celebration of the 100th anniversary of November 5, 1811, where This city gave the first cry of independence For Central America, and in tribute to the Founders José Matias Delgado, Manuel José Arce, Nicolás, Manuel and Vicente Aguilar Juan Manuel Rodríquez, Miguel and Juan Delgado, Pedro Pablo Castillo, Carlos Fajardo and Francisco Morales, and to all those Other citizens that formed the foundation of our Nationality, of our democratic republics and of Our glorious and free institutions.”