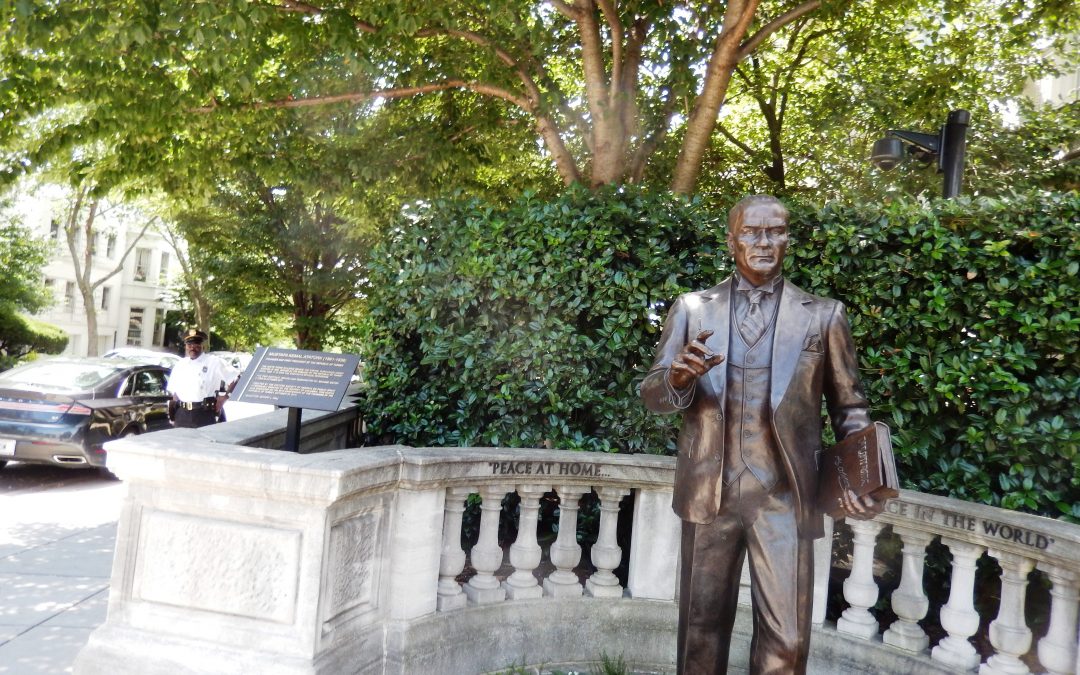 In Turkish, the phrase “Yurtta sulh, cihanda sulh” — “Peace at Home, Peace in the World” — was first said by Mustafa Kemal Atatürk on 20 April 1931 to the public during his tours of Anatolia (aka Asia Minor.) This stance was later integrated and implemented as the foreign policy of the Republic of Turkey.

Atatürk was a Turkish field marshal, revolutionary statesman, author, and founder of the Republic of Turkey. He was its first President from 1923 until his death in 1938. His leadership undertook sweeping progressive reforms, which modernized Turkey into a secular, industrial nation.

After World War I, following the defeat of the Ottoman Empire, he led the Turkish National Movement, which resisted having the mainland of Turkey being partitioned among the victorious Allied powers. He subsequently abolished the decrepit Ottoman Empire.

As the president of the newly formed Turkish Republic, Atatürk initiated a program of political, economic, and cultural reforms with the ultimate aim of building a modern, progressive, and secular nation-state. He made primary education free and compulsory, opening thousands of new schools all over the country. He also introduced the Latin-based Turkish alphabet, replacing the old Ottoman Turkish alphabet. Turkish women received equal civil and political rights during Atatürk’s presidency ahead of many Western countries.

Erected by the Ataturk Society of America on public space granted by the District of Columbia, this statue was dedicated on the 90th anniversary of the founding of the Republic of Turkey, October 29, 2013. The building behind the statue, purchased under Ataturk in 1936, served as the embassy of the Republic of Turkey until 1989. It is now the embassy’s official residence. It is on 23rd Street Northwest south of Sheridan Circle.

The book he is holding is Nutuk a famous six‐day speech (nutuk) he gave in 1927 at the General Congress of the Turkish Republican Party, presenting his own account of the War of Independence.