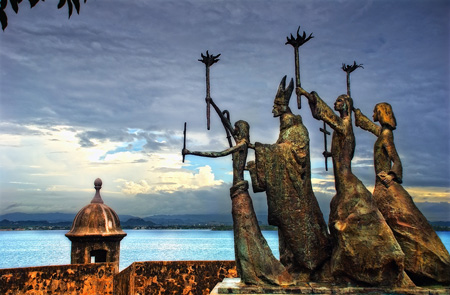 La Rogativa is a famous bronze statue located in the Plazuela de la Rogativa on Caleta de las Monjas near La Puerta de San Juan. Derived from the verb rogar, meaning to plea or to supplicate, a rogativa is a procession making a plea to God for help.

British troops, led by Lieutenant-General Sir Ralph Abercromby, took control of the city by naval blockade on April 30, 1797. The bishop of San Juan ordered a rogativa.  The women of San Juan marched through the streets that night. They started at the Cathedral, sang hymns, carried torches and bells, and prayed for their city’s deliverance. The British mistook the sights and sounds as evidence of the arrival of reinforcements. Considering themselves to be outnumbered, Abercromby’s fleet abandoned the city.

There are four bronze statues pay tribute to the efforts of the townspeople and their Bishop. Lindsay Daen of New Zealand completed the statue in 1971. It stands 12-feet high in front of an old sentry box and a beautiful view of San Juan Bay.