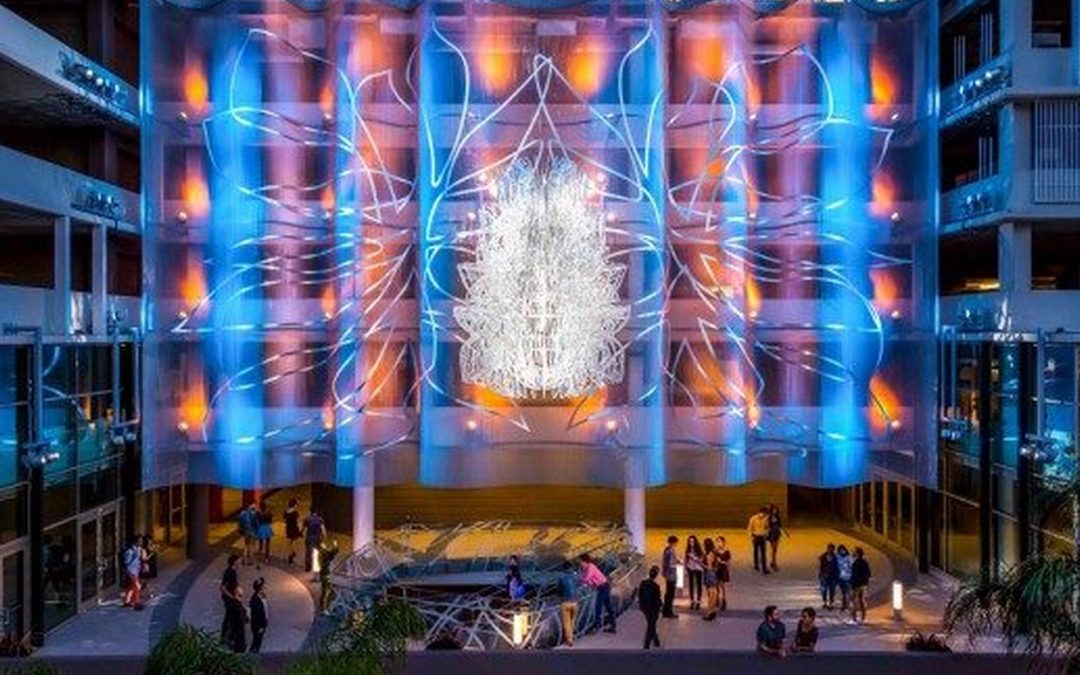 The sculpture in the Koreatown neighborhood, which was revealed in 2015, is situated between the two towers of The Vermont, a mixed-use luxury development featuring retail and residential space, and covers the four floors of the building’s parking structure.

It is comprised of a twenty-foot, three-dimensional sculpture suspended from a 75’ x 45’ transparent, undulating metallic screen. The twenty-foot sculpture consists of one hundred laser-cut aluminum petal-like abstractions of a lotus flower, bathed in an intense white light. The surrounding screen moves through a light show of changing colors that are enriched by its curved structure.

The motif of the lotus is carried through the plaza, in etched glass panels that line the public staircase leading from the plaza, to the second floor balcony overlooking the thoroughfare of Wilshire Boulevard.

The lotus blossom is a recurrent and traditional symbol in Korean art.

The material transparency of ‘Los Angeles Opens Its Heart of Compassion’ and the registration of hundreds of colors on and through its surfaces approximate the shifting demographic of Los Angeles, where one place implodes upon another in a kind of urban kaleidoscope. The delight and strangeness of the colliding traditional and contemporary images held within the sculpture are what attracts attention from the street. The sculpture, like the City, is open to the possibility of its surroundings, embracing the pulse, and people.