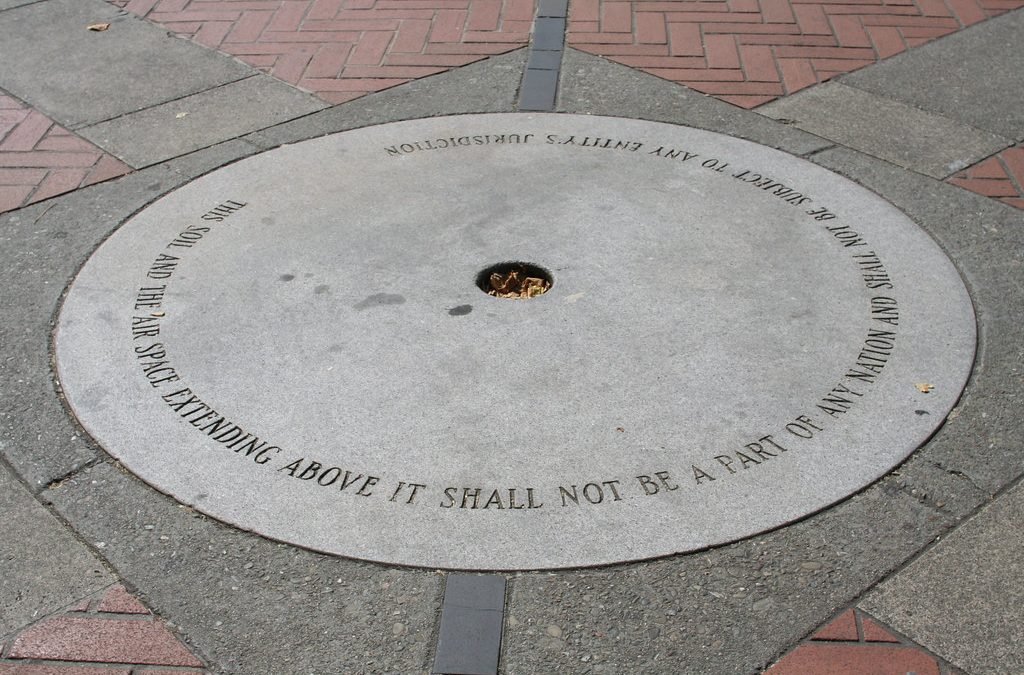 In 1989, the Berkeley Art Project held a national public art competition to create a monument to commemorate the 25th anniversary of the Free Speech Movement, which began on the University of California Berkeley Campus in 1964. The winning design, created by Mark Brest van Kempen (then a graduate student at the San Francisco Art Institute), is an invisible sculpture that creates a small space completely free from laws or jurisdiction.

The six inch circle of soil, and the “free” column of airspace above it, is framed by a six foot granite circle. The inscription on the granite reads:

“This soil and the air space extending above it shall not be a part of any nation and shall not be subject to any entity’s jurisdiction.”

Located near Sproul Hall, the monument, properly called “Column of Earth and Air” is suppose to extend all the way up to the limit of U.S. controlled air space: 60,000 feet. It was installed in 1991.

In 1996, the steps in front of Sproul Hall were dedicated as the “Mario Savio Steps,” in honor of the student leader who had died of a heart attack earlier that year at age 53. His most famous speech was given on these steps on December 2, 1964 in front of 4,000 people. He and 800 others were arrested.

The Free Speech Movement began in 1964, when students at the University of California, Berkeley protested a ban on on-campus political activities. In defiance of the ban on on-campus political activities, graduate student Jack Weinberg set up a table with political information and was arrested. A group of approximately 3,000 students surrounded the police car in which he was held, preventing it from moving for 36 hours.