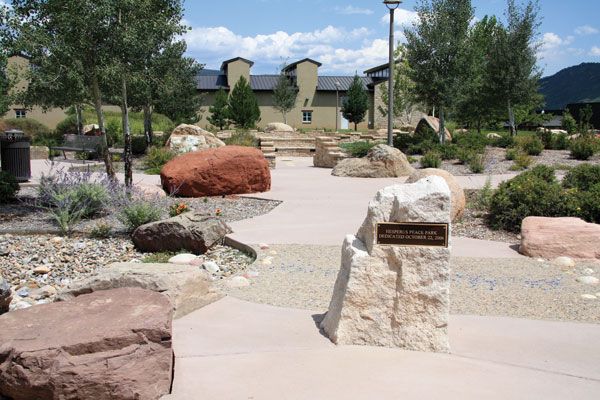 The Hesperus Peace Park is in the style of a kiva on the Fort Lewis College Campus in southwestern Colorado. Fort Lewis College is known for its American Indian Native programs and culture, thus the kiva- style park both reflects the culture of the area and the arid environment. The park is often used for peace-related readings, speakers and demonstrations. In was dedicated in 2006.

The park was arose from the work of Dr. Leonard Bird, a Korean War veteran and peace activist, who taught English at Fort Lewis College for 31 years. In 1957, Mr. Bird and 900 other Marines were ordered to dig foxholes and witness the largest-ever above-ground detonation of a nuclear weapon, in Yucca Flats, Nevada. Only 4,000 yards from the impact zone, Bird and others were ordered to face an explosion that rose 60,000 feet in the air and rained down fire and radiation across a wide expanse of the Nevada desert. A book came out of this experience: Folding Paper Cranes, An Atomic Memoir. He died, in 2010, of radiation induced cancer from his exposure. He was a founder the the Peace & Conflict Studies Program at the college.

After he retired, his book was used a all-campus common reading experience. The entire campus made paper cranes, and art students made a large iron crane to house them. Music students made a peace bell from a discarded oil drum and everyone rang it as they deposited their cranes at the dedication ceremony. The Theater department made Bird’s book into a play, which had it’s premiere at the Parks dedication. Four historians participated in a panel on the impact of dropping the atomic bomb.