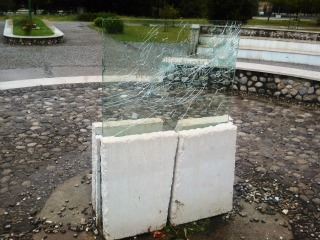 Since the wars of the 1990s, the Balkan governments have erected hundreds of monuments honoring civilian victims and fallen soldiers from within their own ethno-national group but there has been only one small glass memorial which pays tribute to civilian casualties who lost their lives during all the Yugoslav wars. This small glass memorial is in Pobrezje Park in the Montenegrin capital Podgorica. Its inscription reads: “To the civilian casualties of the wars in the former Yugoslavia in the period between 1991 and 2001 – never to be repeated.”

The memorial was inaugurated on July 11, 2011, on the anniversary of the Srebrenica genocide. According to the culture ministry, it expresses “the entire society’s commitment to the generally accepted principles of justice” and Montenegro’s determination “to build itself as a state based on the respect for the principles of the rule of law, tolerance and human rights”.

In the year that followed its inauguration, the memorial was vandalized three times and the glass is now cracked and scored with scratches.