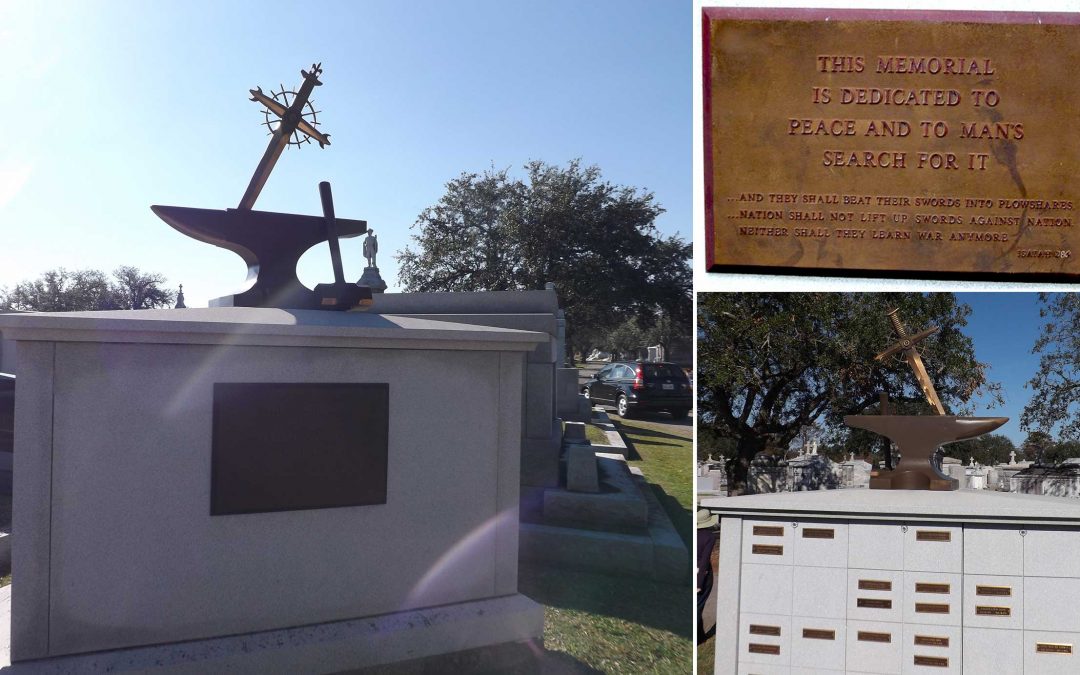 This memorial is located in Metairie Cemetery, just outside New Orleans. The text on the plaque reads:

This memorial is dedicated to Peace and man’s search for it.

…And they shall beat their swords into plowshares
….Nation shall not lift up swords against nation, neither shall they learn war anymore.

It appears to serve as a columbarium — a place with niches for cremated remains — as evidence by the brass nameplates on the back of the monument.

The erection of a peace memorial on this site could be connected to its military connections. Up until the Civil War this site was a racetrack. The Confederacy commandeered is as a camp (Camp Moore.) After Admiral David Farragut and the Union Navy invaded and took possession of the city in 1862, the camp was abandoned. A wealthy business=man bought the racetrack and turned it into a cemetery in 1872.

The Army of Northern Virginia, Louisiana Division, Benevolent Association, built a tumulus (burial mound) containing 57 crypts, atop of which stands a 38 foot column, upon which is a statue of Lieutenant General “Stonewall” Jackson. You can see this statue just to the right of the anvil in the photo above. When former Confederate President Jefferson Davis died while visiting New Orleans in1889, he was buried in one of the front vaults of this tumulus. (Davis’ remains were transferred to a permanent burial place in Richmond, VA in 1893.)