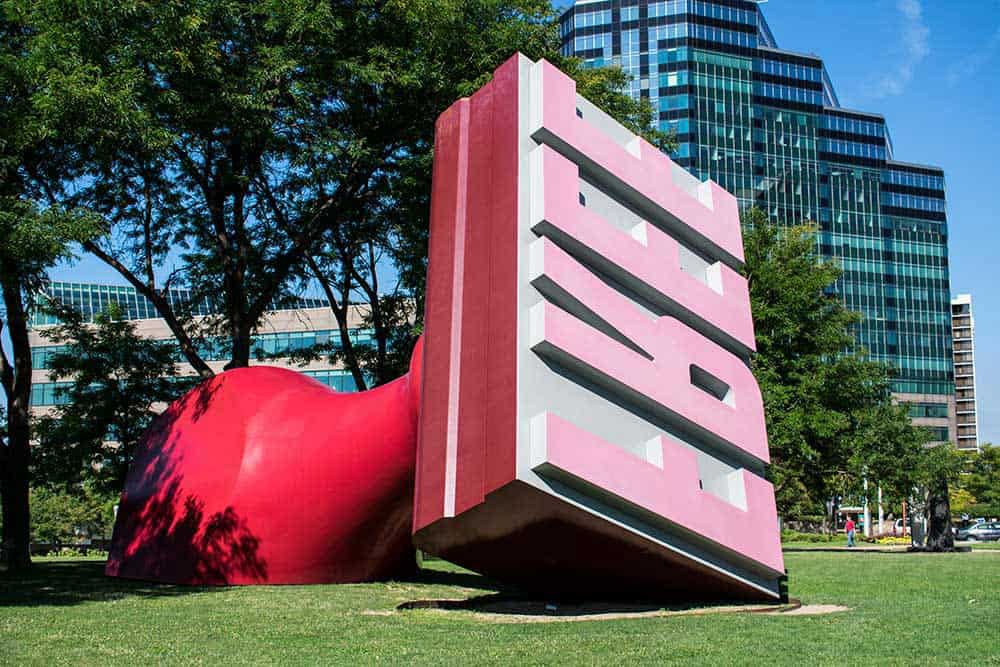 The stamp was also supposed to sit in front of the new Standard Oil of Ohio building however after BP purchased the company they didn’t want the stamp in front of their BP Tower. BP donated the sculpture to the city of Cleveland in 1991 and it has been located in Willard Park ever since.

The process of creating the Free Stamp, from its conception to its arrival at its present location in Willard Park adjacent to Cleveland’s City Hall, covers nearly ten years. In 1982 Standard Oil Company of Ohio (SOHIO) commissioned us to create a work in front of its new headquarters, a skyscraper built out of pink stone on Public Square in the city center. The base on which the sculpture was to be situated was an area made of concrete that reminded us of a stamp pad. Associations followed and soon we had our subject: a colossal rubber stamp, an object then still common in the office culture of the surroundings (though, like many of our subjects, verging on obsolescence), with a decidedly architectural character, scaled to mediate between the street and the atrium behind the sculpture. In overall shape, it also echoed the nineteenth-century Soldiers’ and Sailors’ Monument in the center of the square.

Our design made it necessary for us to select a short word to be “reproduced” by our stamp — four letters at most. Coosje chose “free,” a word with multiple implications, comparable to “liberty,” the word held aloft by the female figure atop the monument across the street. The word was related paradoxically to its compressed position, and could not beread, only imagined by studying the edges of the letters.

The Free Stamp was proposed and approved, and work began on its fabrication. Halfway through, however, the company changed ownership, becoming British Petroleum; as a result the sculpture was abruptly canceled. There were protests in the city and eventually we were offered alternative sites by a committee to preserve the sculpture. At first, the Free Stamp’s close connection to its original site seemed too strong, but we then realized that a stamp has no fixed position and is just as often seen lying down as it is standing up. One could imagine that the Free Stamp had been picked up and thrown, landing on its side in Willard Park, one of the sites offered by the city, in view of the British Petroleum skyscraper. The new position also had the important advantage of fully revealing the word “free,” radiant in its pink hue, though in reverse.

In an interview at the sculpture’s 1991 dedication, Oldenburg said the stamp’s message, “Free,” referred to the emancipation of American slaves during and after the Civil War. Below is the Soldiers and Sailors monument that would have been across the street at the original location: