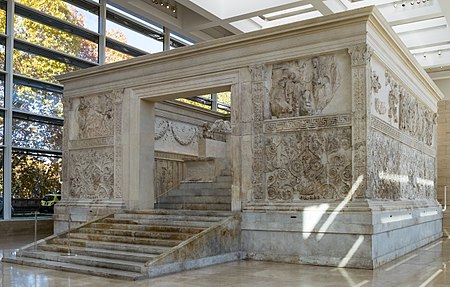 The Ara Pacis was built between the years 13 and 9 B.C.E. to celebrate peace in the Mediterranean after the victorious battles of Emperor Augustus in Hispania (Spain & Portugal) and Gaul (present day France, Luxembourg, Belgium, most of Switzerland, and parts of Northern Italy, Netherlands, and Germany.)

Erected in the Campus Martius (Field of Mars, the Roman god of war), the monument was dedicated to Pax, the Roman goddess of Peace. Each year, a ram and two oxen were sacrificed in the goddess’s honor.

The altar was in the floodplain of the Tiber, and was eventually buried in 13 feet of silt. Hidden for a millennium, the first fragments were uncovered in 1568. In 1938 Mussolini had it reconstructed and placed in a pavilion, part of an ancient Roman “theme park” he assembled to lend his fascist regime legitimacy. In 2006 a new modern glass and steel museum was constructed to house Ara Pacis.

Ara Pacis role as an actual peace monument is murky. The altar represents the Pax Romana (Roman Peace), a roughly 200 year period when the Romans surrendered their rights to an authoritarian regime in exchange for stability and prosperity.