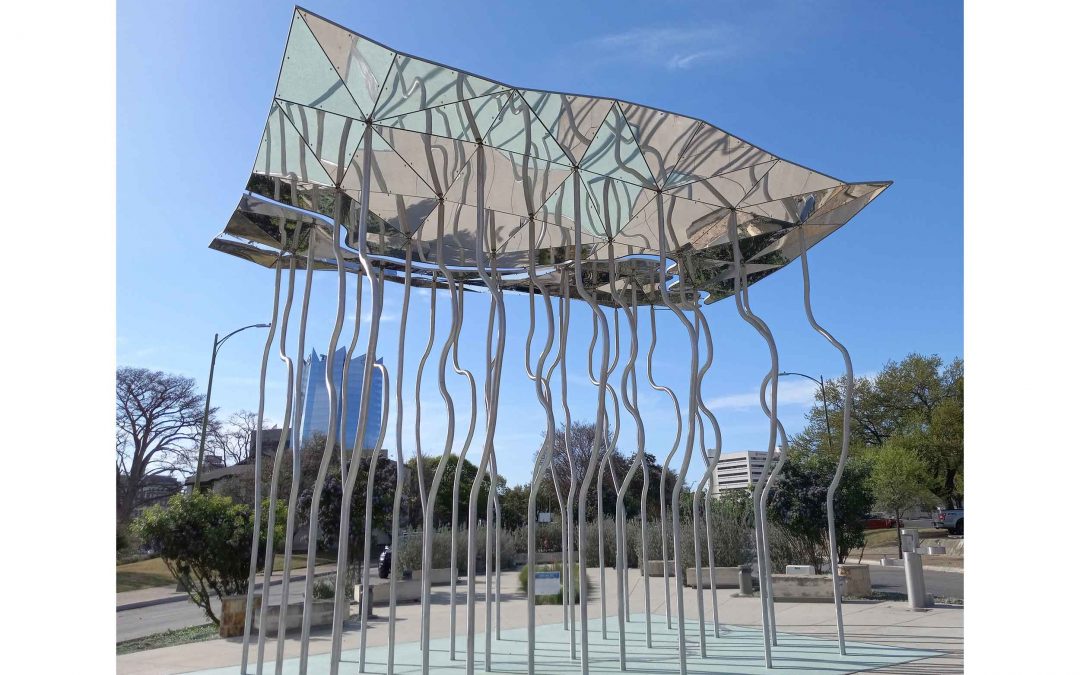 This was the first statue installed in San Antonio’s new San Pedro Creek Culture Park, a linear urban park that was previously a concrete-lined drainage ditch that serviced stormwater runoff in downtown San Antonio. Once complete, the 2.2 mile-long park will include 60,000 linear feet of new walls, four miles of walking trails, eight restored and redesigned bridges, eleven acres of planting beds, and a variety of artwork depicting scenes from the city’s history. The park will contain the 100-year flood plain while transforming the banks of the flood-control channel, which historically served as a barrier between the city’s west side and downtown, into walkable green space and a community gathering place.

Designed by Stuart Allen and Cade Bradshaw, installation was completed in February, 2022. The artwork was commissioned by Bexar County Commissioner’s Court in honor of Bexar County’s 300-year anniversary.

Artist Statement:  Archaeologists have found evidence of human settlement along San Pedro Creek reaching back 10,000 years. Bubbling up from the springs in what we now know as San Pedro Springs Park, the Creek has shaped our history, its path dictating politics, commerce and culture. In many ways, the story of Bexar County and San Antonio is the story of San Pedro Creek.

Creek Lines, sited in San Pedro Creek Culture Park’s Plaza de Fundación, celebrates the path of the Creek. The line carved by these waters – from the headwaters at San Pedro Springs to the confluence with the San Antonio River – is represented by a cut in the sculpture canopy and on the ground in stainless steel. The 30 curved poles supporting the canopy represent the same line, cut into five separate segments. Each pole represents one decade of Bexar County and San Antonio’s 300-year modern history. At the base of each pole, a plaque describes a single historical event from the sequential decades. The faceted mirror finish on the underside of the canopy reflects the surrounding environment and activity beneath, creating a playful and contemplative sequence of color, imagery and motion.

It is the choice of significant events that elevates this artwork into a justice monument. The Battle of the Alamo is, of course, one of the events — but so are the “Juneteenth” announcement of the Emancipation Proclamation and the desegregation of San Antonio’s schools after the Brown v. Board Supreme Court decision.

The entire park promises to be a shining example of a monument to the ordinary people rather than a celebration of traditionally defined “important” people and events. Another indicator of this approach is the mural “De todos caminos somos todo uno,” pictured below. From the left approach the indigenous Payaya people, from the right, the Spanish colonizers. They meet in the middle — a family, kids playing in the creek . . . . all of us. It’s refreshing.

De todos caminos somos todo uno. (From all roads we are all one.) Mural (2017) by Adriana Garcia, located between Santa Rosa Avenue and Martin Street.