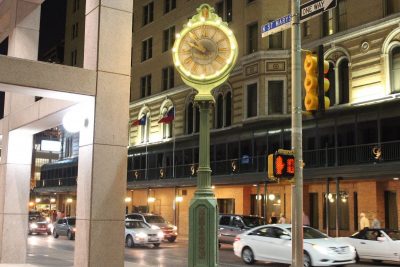 Cast in iron by E. Howard Clock Company of Boston, his clock was first installed in front of Eli Hertzberg Jewelry Company on Commerce Street in 1878. In 1910, when Commerce St. was widened, the company – and its clock – moved to the corner of St. Mary’s and Houston Streets. When Zales purchased the jewelers in 1964, the store relocated to suburbia, leaving the clock behind. In 1982, the daughters of the Hertzberg owners donated the clock to the San Antonio Conservation Society Foundation. 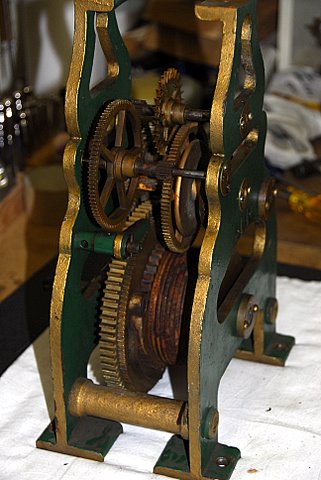 The clock is unusual in that it continues to be hand wound rather than electrically driven, thought to be the last of its kind still in use. It runs purely on kinetic energy like the rocking pendulum and dangling weight system of a grandfather clock. The clockworks pictured here are in the base, photographed when they were removed for a minor refurbishment in 2008.  It only requires winding once a week, but a metal fabricator who works at the nearby IBC building has taken it upon himself to wind the clock twice a week, as it is more accurate that way.