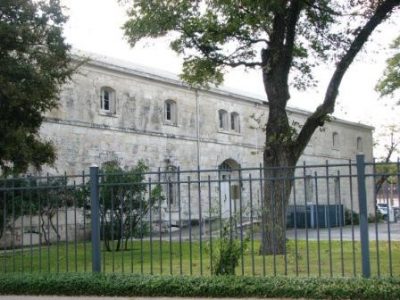 The Arsenal is now (mostly) the corporate HQ for the H.E.B. grocery chain — 2.7 acres of it is a public park, including the Commander’s House, is now a senior citizen activity center.

The San Antonio Arsenal was founded in 1859 to furnish arms and munitions to the frontier forts in Texas.

During the Civil War the twenty-one-acre reservation was occupied by Confederate forces and the supplies were deployed for the Confederate war effort. After the war the United States Army once again took possession of the complex and enlarged it over the course of the next half century; by the end of World War I the arsenal comprised thirty-eight buildings. The operation reached its height during World War II, when it shipped more than 337,000,000 pounds of ammunition.

The arsenal was closed in 1949, although its buildings continued to be used as federal government offices. In 1972 two acres and three buildings were transferred to the city of San Antonio to be used as parkland. Several of the remaining buildings were torn down. In 1985 H-E-B bought the remaining acreage on the bank of the San Antonio River and remodeled the existing structures for the grocery company’s corporate headquarters.

To backtrack a bit, Texas became a state in 1845; in 1849, the Alamo was retrofitted by the quartermasters to serve as an arsenal. During these Alamo renovations, a new wooden roof was added to the chapel and the campanulate, or bell-shaped façade, was added to the front wall. The decision to move was made in 1853. The office building, pictured above, was the first Federal building built from the ground-up in Texas; it was the only completed permanent structure when the Confederate Army occupied the Arsenal. The Magazine and armorer’s shop were finished later by the Confederates.

Camp Stanley (about 20 miles north, near Boerne) was used for additional storage space, and when the arsenal was closed there were 50,000 tons of ammunition and 15,000 tons of general supplies to be moved to the Red River Arsenal, west of Texarkana.