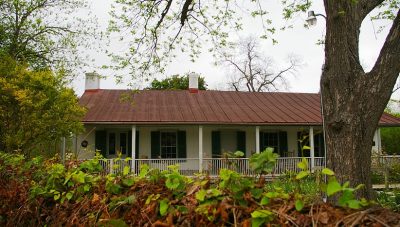 Miss Ernestine E. Edmunds, a school teacher and granddaughter of Manuel Yturri Castillo, willed this two-third acre tract to the San Antonio Conservation Society in 1961. Yturri Castillo had received the land grant, originally part of Mission Concepción lands, in 1824, from the Mexican Government.

Built between 1840 and 1860, the house is one of the few adobe-block houses remaining in San Antonio. The walls are 18 inches thick and exposed in one area, showing dried bricks made from earth bound by goat’s milk and goat’s hair. The north rooms span a branch of the Pajalache Acequia, built in the 1730s to provide irrigation for Mission Concepción. The grist mill was reconstructed in the 1960s and the Oge Carriage House, also on the property, was moved here from the King William area.

It’s considered a house museum but is open only by appointment.

This post was originally written for the Texas Trail Roundup.