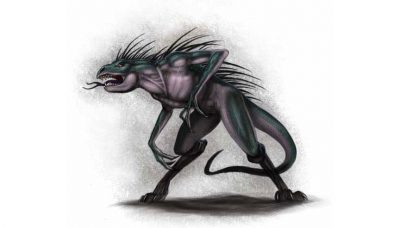 The legend of the chupacabra is a surprisingly recent one, originating in Puerto Rico in 1995. The name means “goat sucker” in Spanish, and a series of farm animal mutilations on the island were attributed to a horrific lizardy creature, like the one pictured above. The San Juan Star reported that it had a “reptilian body, oval head, bulging red eyes, fanged teeth and long, darting tongue.” The police spent a year looking for a chupacabra, without success.

Nevertheless, alleged sightings spread around the world. In Mexico and Texas the chupacabra is described as dog-like and the chupas that have been “captured” turned out to be emaciated dogs, coyotes or even “coydog” mixes with mange, a mite infestation that is often fatal in canines.

San Antonio became connected with the chupacabra when in 2013 the SciFy Network aired a made-for-TV movie, “Chupacabra vs. The Alamo,” starring Erik Estrada. He plays a motorcycle riding DEA agent pitted against chupacabras that came to San Antonio through drug cartel tunnels. Yeah: it’s just a terrible as it sounds. You can watch the entire move online, but don’t, just DON’T. Settle for the 31-second-long trailer:

The Daughters of the Republic of Texas, who were custodians of the Alamo at the time of the film’s release, were not amused. Then-president Karen Thompson told the San Antonio Express-News, “We work very hard to be sure the history of the Alamo and the fact that it’s a shrine to 189 men who died there to fight for liberty is not something you make fun of or use in some sort of horror, comedy,sci-fi or any sort of movie other than a historical documentary.”

Will you see a chupacabra when you visit San Antoio? You’re just as likely to see the Loch Ness Monster vacationing on the Riverwalk. If you THINK you spot a chupacabra, remember: coyote with mange. Walk away. There’s nothing for you to see here.